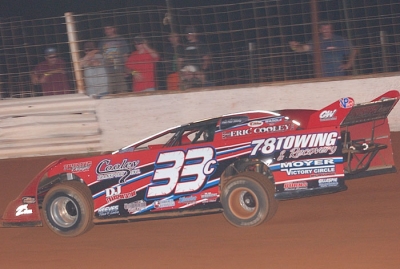 WINONA, Miss. (May 7) — Eric Cooley of Fulton, Miss., raced to his second straight NeSmith Chevrolet Dirt Late Model Series victory Friday in the Mid-State Nationals 40 at Central Mississippi Speedway. The 19-year-old reigning series champ led all 40 laps and was never challenged in route to his third series career win in a race that was a survival of the fittest, as just eight of the 24 cars that started the race were around for the checkered flag.

A hot and humid evening combined with a heavy clay surface that clogged radiators led to the majority of the field suffering overheating problems.

“That was a long, hot 40 laps of racing,” Cooley said. “It was not only tough on the engines running hot, but on drivers too. I couldn’t wait to get this one over with because I was really thirsty with cotton mouth. Running up front was a real advantage to surviving the race because I think my car didn’t get as hot as a lot others did.”