Franklin capitalizes on Parker's flat tire at I-77 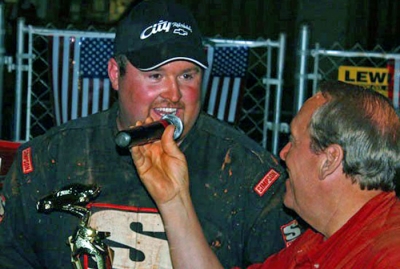 Dennis Franklin in victory lane at I-77. (Gary Laster)

CHESTER, S.C. (May 1) — Inheriting the lead after polesitter Ron Parker's mid-race flat tire, Dennis "Rambo" Franklin led the rest of the way at I-77 Speedway on Saturday for a $2,500 victory on the NDRA Heintz Brothers Performance Road Show.

Parker, of Lawndale, N.C., led 25 laps but saw his chances at a second consecutive NDRA touring victory end when a flat forced him to pit. Franklin led the rest of the way for the victory.

Jeff Cooke of Spartanburg, S.C., who started on the second row with Franklin, finished second while seventh-starting Ross Bailes of Clover, S.C., finished third in front of a near-capacity crowd.