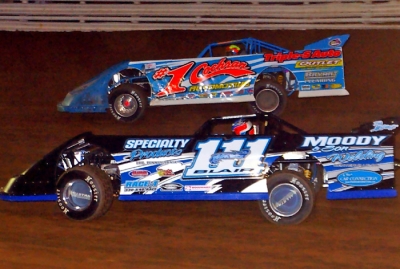 MIDDLEBOURNE, W.Va. (April 17) — Mike Pegher Jr. of Wexford, Pa., wrestled the lead from Max Blair of Centerville, Pa., with five laps remaining at Tyler County Speedway, but he handed Blair the victory by mistakenly slowing on the white-flag lap, thinking the race was over. Blair zipped past to collect a $1,500 victory on the Fastrak's Northeast and Mid-Ohio Valley tours.

"I've never won one this way before," said the shocked 20-year-old Blair in victory lane, "but I'd rather be lucky than good any day."

Pegher picked up speed again in time to finish second, holding off Mike Blose of Dayton, Pa. Freddie Carpenter of nearby Parkersburg, W.Va., crossed the line fourth, but he was disqualified for failing to report to postrace tech inspection. That moved Kyle Thomas to fourth and David Scott, who led the first six laps, rounded out the top five at the quarter-mile oval.

Blair took over from Scott on the seventh lap and stayed in command until Pegher fought his way past on the 20th lap.