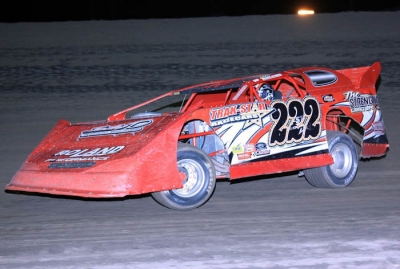 GREENVILLE, Miss. (April 9) — Mike Boland of Cuba, Ala., slipped through a last-lap crash at Greenville Speedway to win the NeSmith Chevrolet Dirt Late Model Series Rumble on the Gumbo. Boland took the lead from Justin McRee on the third lap and cruised the rest of the way to earn $2,000 in a 40-lapper with a dramatic conclusion. | Slideshow

As Boland entered the first turn after taking the white flag, the lapped cars of Jay Burchfield and Frank Wilson tangled as Boland was on their inside. Boland just got through and went on to take the checkered flag with a 4.298-second advantage.

“I’ve got to thank the Good Lord for getting me through that wreck on the last lap,” Boland said. “I would have really hated to lose the race that way, but He was watching over me.”

The caution-filled race lasted more than 70 minutes with the yellow flying 12 times for spins and debris. Two red flags also appeared, including once for a multicar tangle in turn three on the 27th lap that blocked the track. Cliff Williams of Star, Miss. was hit from behind to trigger the accident.