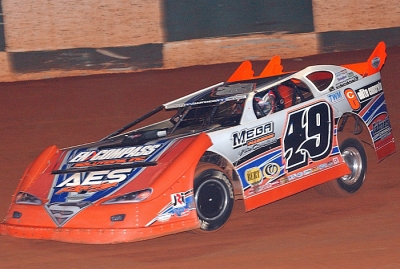 Madden led the first 20 laps but faced a flurry of lapped traffic when Davenport made his winning move, using the extreme high side to slip into the lead entering turn three at the 3/8-mile oval.

"It was a risk I had to take at the time," said the third-starting Davenport, a 26-year-old driver from Blairsville, Ga. "I could see the track was starting to take rubber and a strip was developing. It was my opportunity and I had to go. I knew he'd be hard to pass for the lead if I didn't make the move right then. He's good, and he ain't gonna make too many mistakes, especially if the track was gonna be rubbered up later in the race."

A frustrated Madden chased Davenport the rest of the way in a race with a 50-lap break that didn't see a pass among the top five in the second half of the event.

"He made a gutsy move off the racetrack in all that lapped traffic, and I was running up there pretty high and actually had to move down to give him some room," said Madden, the Gray Court, S.C., driver and two-time Southern All Star champion making his first career start in a crate engine-powered Late Model. "It's a good thing I'm not a dirty driver, because it was so close that all I'd have to do was nudge the steering wheel to the right and he'd have been out there in the grandstands.

"It was a ridiculous move. It's not one I'd make, because I'm not gonna put myself in a risky position like he did. I've got bills to pay on this car, and you can't race like that when you're responsible for your own repairs. It's frustrating to lose because we've had the fastest car all weekend, but I'll take the blame for letting it happen."

Fourteen cautions slowed the action, including 11 during the first 50 laps. Among the most serious accidents was a chain-reaction wreck on a lap-38 restart that sent many cars spinning off the fourth corner heading for a green flag. Another caution on lap 41 blocked turn one and caused damaged to the cars of Stacey Roberts, Jason Hiett, Randy Hill, Brian Smith, T.J. Alford and reigning Green Valley Crate champion Chris Noah.

Cautions on laps 61, 64 and 85 slowed the action the second half of the race, and Madden took a final stab at Davenport on the last restart, ducking low in turn one and slightly catching Davenport's left-rear quarterpanel. Madden's car lost momentum and Davenport ran unchallenged the rest of the way.