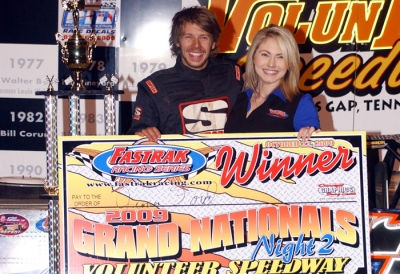 BULLS GAP, Tenn. (Oct. 22) — Fast qualifier Jensen Ford of Piney Flats, Tenn., took the lead on the 17th lap and dominated the rest of the 50-lap Fastrak Grand Nationals feature at Volunteer Speedway. The 21-year-old Ford, whose family owns and operates TNT Race Cars, earned $1,500 in the first event of a two-race Grand Nationals weekend that wraps up the season for the Fastrak Crate Late Models.| Slideshow

“What an awesome early birthday present, to be able to win this prestigious race here at my home track,” said Ford, who turns 22 on Saturday. “Having to pass the cars who won heat races, I just tried to be patient in the early laps. I could see some room up above where the other cars ahead of me were running in the corners, and from running here regularly I knew my car would stick up in the high groove. That’s how I picked all the cars off I passed to get into the lead, going above them and passing them on the outside."

Brandon Umberger of Rural Retreat, Va., finished second followed by Mike Pegher Jr. of Wexford, Pa., who leads the chase for the $30,000 Grand Nationals crown heading into the weekend's event at Wythe Raceway up I-81 near Wytheville, Va. Wythe regular Kenny Peeples Jr. was fourth was Volunteer and Shanon Buckingham of Morristown, Tenn., who is second to Pegher in the Grand Nationals standings, rounded out the top five.

At the outset, Arnold took the lead with Pegher, Umberger, Ford and Max Blair giving chase in the event that drew 49 drivers from 10 states. With most drivers working the middle and lower grooves, Ford began working the high side and gained ground, getting up to third behind Arnold and Pegher.

On the 16th lap, Ford went around Pegher to take the runner-up spot, then charged outside Arnold entering turn two and emerged from turn four with a lead he'd never give up.

With the frontrunners working lapped traffic, Arnold's race was over on lap 31 after he and Blair were caught up in frontstretch crash. Arnold's machine was turned head-one into the outside wall, bounding high in the air and flipping before coming to rest near the flagstand. No one was injured but Arnold and Blair were through.

Ford edged away the rest of the distance for the victory, duplicating an April 25 Fastrak triumph at Volunteer.