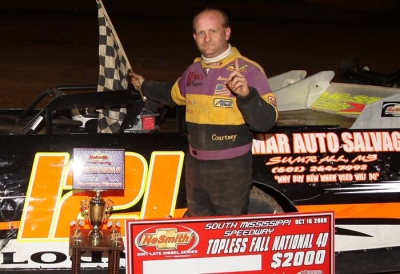 “I’ve won some big modified races, but this is the biggest Late Model win of my career,” Blount said. “This is a new Trak-Star chassis for us that we’ve only raced five times, and I’ve got to thank Mike Boland at Boland Performance for helping us out. The drivers in the NeSmith Chevrolet Dirt Late Model Series are top notch, and it feels good to win at this level.”

In four previous series events this season, Blount’s best finish was 13th. With the exception of restarts after the four caution flags in the race, Blount was able to maintain a half straightaway lead over runner-up Ben McCreary of Baldwyn, Miss. McCreary's runner-up all but clinched the $5,000 Sunoco Race Fuels Rookie of the Year honors; all he has to do is start Saturday night’s race.

Blount outran McCreadry exiting turn two on the first lap, and he knew that would be key to the race.

“I was watching the heat races and saw that the car that started on the outside of the front row could take the lead at the start of the race,” Blount said. “I tried to keep Ben from moving up on me at the start. He raced me clean, I held my line, and that’s what it took to take the lead.”

The race was slowed by four cautions flags and one red flag, the most serious for Mike Boland's spin on the backstretch that put his car up on its left side. He wasn't injured.