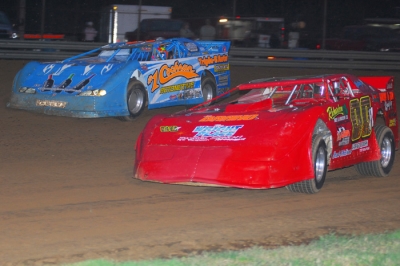 MERCER, Pa. (Oct. 3) — Mike Pegher Jr. of Wexford, Pa., fired the first shot in the three-race Fastrak Grand Nationals with a flag-to-flag victory Saturday in the Northeast Region opener at Mercer Raceway Park. Pegher's 30-lap victory worth $2,000 assures him of a tie for the points lead heading toward the $30,000 Fastrak crown decided in three weeks.

"This is a lot better than where we were last year," the 23-year-old Pegher said. "We got 19th here last year so hopefully we can pull it off this year. The track was a little rough tonight, but it wasn't too bad. I wouldn't want to go any more laps with those guys (Mike Blose and Max Blair) behind me. I kept watching the scoreboard."