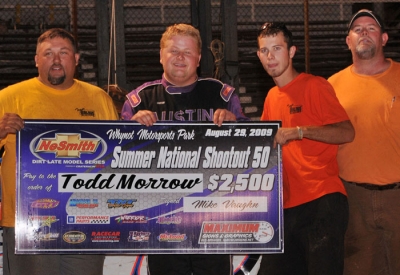 Morrow led all the way while McRee settled for second. Jim McDuffie of Meridian, Miss., was third with Mike Boland of Cuba, Ala., and series points leader Eric Cooley of Fulton, Miss., rounding out the top five.

Morrow got the hole shot at the start of the race over outside front-row starter Stephen Brantley of Monroeville, Ala., to take the lead in turn one. Brantley, McRee, McDuffie, and Matthew Turner trailed Morrow at the end of the first lap. McRee drove outside Brantley down the backstretch on lap two to claim the second spot. Morrow began to work lapped traffic by the eighth lap.

Boland moved into the top five on lap nine when he got around Turner. Lap 10 saw McRee begin to close the gap on Morrow, who was busy negotiating lapped traffic. The first of two caution flags came out on lap 19 when Chase Washington spun in turn three. Morrow led McRee, Brantley, McDuffie and Boland for the double-file restart.

Brantley began to backslide after the restart, as McDuffie, Boland, and Cooley dropped him to the sixth spot.

By lap 25, Morrow had pulled out to a half-straightaway lead over McRee, but the leader caught lapped traffic on lap 27 and McRee began to close the gap. Michael Blount of Sumrall, Miss., hit the third-turn wall on lap 29 to bring out the second caution flag.

As the field rolled around the track under caution, frequent lightning and a steady rain began to fall. When the track became too wet to compete on, officials checkered flagged the race to make it official three laps past the halfway point.