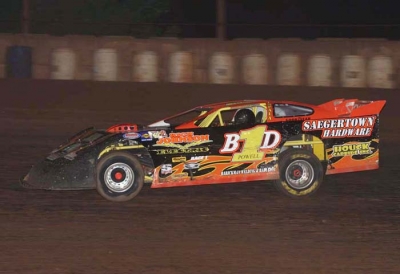 “Max and I are really good friends,” Powell said. “We park together, race together — it’s a lot of fun. I talked with Max before the race and we agreed to finish one-two and not wreck each other. I’m sure he’s happy, maybe not as happy as I am."

Blair settled for second, just .63 seconds behind the winner, but the runner-up finish kept him atop the chase for the $5,000 Fastrak Northeast crown as well as Fastrak's national points, worth $10,000. David Scott of Garland, Pa., was third followed by 10th-starting Mike Pegher Jr. of Waterford and Bryan Salisbury of West Springfield, Pa.

The race was the second straight series event to run nonstop at Tri-City as last year’s 30-lapper on Labor Day Weekend won by Carl McKinney did the same.

Notes: Powell drives a Scott Bidwell-owned car sponsored by Fame RV Center, Jay’s Auto Wrecking and Maloney Tool & Mold. ... He has four career series victories, putting him in a three-way tie for the all-time lead with Max Blair and Dick Barton. ... Before Tri-City, the most recent three series events were rained out or postponed. ... Among drivers failing to make the feature: Steve Hollabaugh, Gary Knollinger and Bob Kish. ... Next up for Fastrak Northeast competitors is a July 24-25 at Dog Hollow Speedway in Strongstown, Pa., and Pittsburgh's Pennsylvania Motor Speedway.