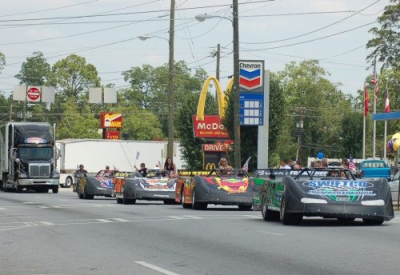 HARTWELL, Ga. (July 4) — Outside front-row starter Royce Bray of Hull, Ga., overtook polesitter Brandon "Cornbread" Haley of Lavonia, Ga., on the 37th lap and led the rest of the way for a victory in the Fastrak Racing Series-sanctioned Firecracker 100 at Hartwell Speedway. Bray earned $5,000 for the victory in the caution-plagued race the winner thought might never end.

"If we didn't set a record for cautions, it sure felt like it," said Bray, the overall 2008 Fastrak champion who picked up his first touring victory of the season.

The most serious incident among the many cautions was three laps from the finish when third-running Owen Osteen of Woodruff, S.C., hit a hole in turn four, lost a wheel and flipped onto his car's rollcage. He wasn't injured.

Notes: The top six qualifiers were locked into the main event. ... To promote the event, Fastrak teams and drivers started the day with an autograph sessions at the local McDonald's, then paraded through the streets of Hartwell in their race cars. ... Half of the 22 starters were running at the finish. ... The next Fastrak touring event in the region is a $5,000-to-win race on July 11 at Cherokee Speedway in Gaffney, S.C.