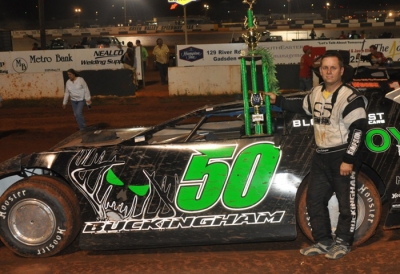 Shanon Buckingham got to trade in this runner-up trophy for a bigger model. (mikessportsimages.com)

Austin Dillon of Welcome, N.C., crossed the finish line first early Sunday morning at the July 3-4 GVS Crate Nationals, but he never picked up the $25,000 check at Green Valley Speedway in Glencoe, Ala.

"It's bittersweet, but it's still a good win," Buckingham said in a Sunday afternoon phone interview. "I feel like we had the best car, because we came from deep in the pack to get around him, and once we got up there, he seemed to have an extra little bit to get right back around us once he knew we were there.

"I'm not taking anything away from him, he drove a great race, and the way we had driven from as far as we'd come, I'd have taken a second. I just want it to all be fair."

The 19-year-old Dillon, grandson of legendary NASCAR team owner Richard Childress, was dropped to last in the 28-car field despite leading the final 70 laps of the 100-lap event.

The long-distance race was marked by three and four-wide racing on a well-prepared track that drew raves from most competitors during the holiday weekend. After nosing into the lead, Dillon opened a huge lead in the race’s middle stages, but several cautions kept drawing his nearest competitors closer. As the race wound down he was far from home free as Buckingham, who fell as far back as 18th in the first half of the event, made a late charge to pull even with Dillon between turns one and two on the 83rd circuit as the leader negotiated his path through lapped traffic.

“I was holding my line and letting the lapped cars work it out among themselves, and then he pulled up there beside me,” Dillon said. “At first I thought he was a lapped car, but the crew signaled me to go, and I knew we had to get movin’ right then and there.”

That was as close as Buckingham got in the closing stages because a caution just three laps after the brief door-to-door exchange between the pair broke up the battle. The yellow flag waved when Chris O’Connor slipped off the backstretch on the 86th circuit to produce the race’s 10th of 11 cautions, interrupting Buckingham’s challenge.

“I had harder tires on the car and was planning for less cautions than we had, so that last one really hurt me,” Buckingham said. “There at the end of the race our car just wasn’t as good, and the yellow stopped us. At the time I was feeling that I could outmaneuver him in traffic because I’ve got a little more experience than he does, but we never got the chance.”