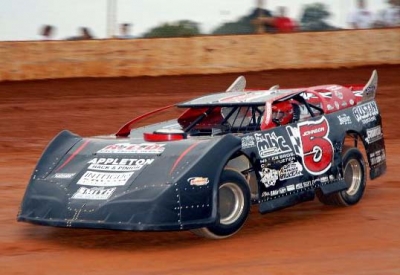 Ronnie Johnson tunes up before his $2,000 victory. (actionshotsetc.com)

RINGGOLD, Ga. (June 5) — Hall of Famer Ronnie Johnson of Chattanooga, Tenn., overtook polesitter Royce Bray of Hull, Ga., on the 25th of 40 laps and went on to a $2,000 victory in the second round of Boyd's Speedway's King of Crate Challenge.

“I like being able to race this close to home," said Johnson, son of late NASCAR driver Joe Lee Johnson. "Boyd's has always been special to me. I remember wishing the rain away on Fridays as a schoolboy so I could go watch my dad race out here back when it was a paved track.”

Bray settled for second while fast qualifier William Thomas of Phenix City, Ala., was third, followed by Craig Burrows of Chickamauga, Ga., and Blake Stewart of Centre, Ala.

Notes: Johnson is sponsored by Austin Trucking, Miller Bros. Coal and American Billet. ... Lamar Scoggins won the night's feature for steel-head Late Models. ... The next round of the King of Crates Challenge is scheduled for Aug. 14.