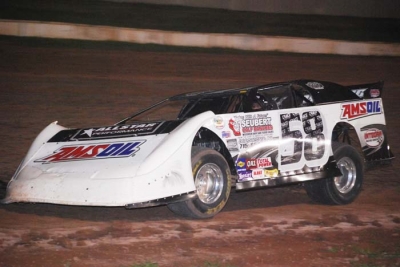 OSHKOSH, Wis. (June 6) — His lap-five pass for the lead called back because of a caution, A.J. Diemel of Navarino, Wis., went ahead on the ensuing restart and led the remainder of the Fastrak Great Lakes touring event at Oshkosh Speedzone Raceway.

Deimel cruised the rest of the way for his second straight series victory while Tom Naeyaert rallied to finish second ahead of Brett Swedberg. Early leader Troy Springborn was fourth and Justin Hirt rounded out the top five in the 30-lap main event.

Notes: Diemel's Rocket Chassis is sponsored by Amsoil and Integra Shocks. ... Diemel had trouble on the way to victory lane because of a hole in the fuel line. A zip tie holding the fuel line broke and the header burned a hole in it. ... Next up for Fastrak Great Lakes competitors is a June 21 event at Eagle Valley Speedway in Jim Falls, Wis.