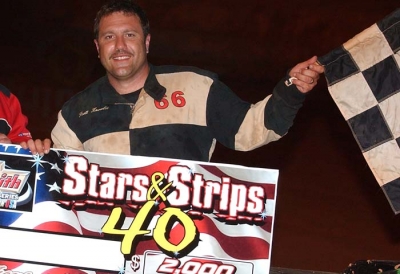 PENTON, Ala. (May 29) — Scott Knowles of Lanett, Ala., remained undefeated at Penton Raceway in 2009 by winning the NeSmith Chevrolet Dirt Late Model Series Stars and Stripes 40.

Knowles, the 2008 Sunoco Race Fuels Rookie of the Year, took the lead on a lap-14 restart from fast qualifier Derrick Rainey of Powder Springs, Ga. Knowles got to the inside of Rainey in turn one, and grabbed the lead coming off the second turn. | Slideshow

“I’ve got to thank Derrick Rainey for racing me clean,” Knowles said. “I tried a couple of times earlier on the race to get under him, but on that restart, he pushed up just enough for me to get under him to take the lead. I also want to thank the lapped cars for staying up high late in the race, and giving us plenty of room.”

Notes: Knowles drives a Warrior Race Car sponsored by All-Star Graphics. ... Knowles can get a $1,000 bonus if he can sweep the series weekend in Saturday's feature at East Alabama Motor Speedway in Phenix City. ... Fifteen drivers completed 40 laps and 17 were running at the finish. ... Provisional starter Jason Wilson won the GM Performance Parts Hard Charger honors with his 23rd-to-15th run.