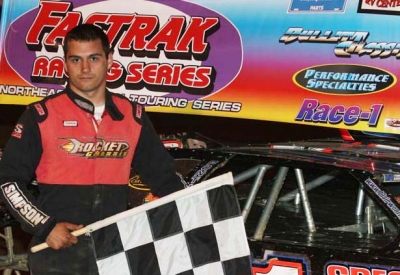 MERCER, Pa. (May 25) — Max Blair of Centerville, Pa., survived some close calls, scrapes, and near misses to win the Fastrak Northeast-sanctioned Steel Valley Memorial Day Classic at Mercer Raceway Park. Blair, who triggered a five-car accident when he made contact with Tom Snyder Jr. on a lap-19 restart, fought off a late challenge from Mike Pegher Jr. for a 25-lap victory worth $1,200. | Slideshow

"I will take responsibility for that deal on the next-to-last restart," the 19-year-old Blair said. "I came up the racetrack and didn't mean it. I thought I had him cleared and I didn't do that intentionally. The track really came around after the first few laps. It was a really nice track that you could race all over it."

Jason Rider took the early lead with Snyder in pursuit, but after a lap-12 caution, Blair overtook Rider while Gary Knollinger and Snyder dropped Rider back to fourth. Snyder regained second a few laps later while Mike Pegher Jr., on a two-race Fastrak Northeast win streak, cracked the top five.

After the lap-19 scramble, Pegher was up to second and stalking Blair. Pegher drove lose in turn four on the final lap and spun, dropping him to ninth in the final rundown. Knollinger got second followed by 10th-starting David Scott.

Notes: Blair's Rocket Chassis is sponsored by Eagle Hoist & Winch, Specialty Products, Loney Timber and Moody Welding. ... He has six career victories at Mercer, including three in 2009. ... The next Fastrak Northeast event is scheduled for June 27 at Roaring Knob Motorsports Complex in Markleysburg, Pa.