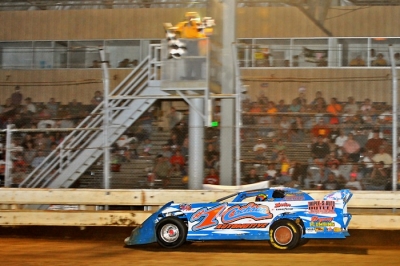 HARTFORD, Ohio (May 23) — Mike Pegher Jr. of Wexford, Pa., made it 2-for-2 on the Fastrak Northeast Series at Sharon Speedway by capturing the 25-lap feature after hard battles first with Dan Angelicchio, reigning series champ Max Blair and finally David Scott at the 3/8-mile oval. | Slideshow

"I let David (Scott) by me, but I was able to get back by him there," said the $1,200 winner from Wexford, Pa. "There was some contact, but that's part of racing. He would have done the same thing to me. He got me at Lernerville (Speedway), now we're even. I wish the season was over right now, but we have 15 more! I just hope it ends like this every night."

At the outset, Angelicchio raced into the lead while Blair was able to slip under John Watson for second at the end of lap one. Pegher, who started fifth, moved to fourth on lap two before the event's first caution for a Garrett Mott's spin. When racing resumed, Angelicchio and Blair raced side-by-side with Blair taking charge of the event as he led lap four, while Pegher advanced to third past Watson. One lap later, Pegher got under Angelicchio for second.

All eyes were on the 10th-starting Scott as he worked his way into contention making a great move on the inside racing off turn two and down the backstretch to get by Steve Hollabaugh and Watson for fourth on lap eight.

The battle heated up for the lead as Pegher ran down Blair and was on his bumper on lap nine. The two made contact on lap 10, but Blair maintained the lead. On lap 13, Blair and Pegher once again ran side-by-side keeping the fans on the edge of their seats.

On lap 15 after 11 straight green flag laps, Bryan Salisbury spun in front of the leaders. Pegher got into Blair as the two somehow missed the accident; however, the contact cut Blair's tire sending him to the pits for fresh rubber.

West Virginia's Gary Knollinger brought out the event's third caution with still 14 laps completed. When racing resumed, Scott was able to get past Angelicchio to grab second on lap 15. A caution for debris bunched the field up again. It was perfect timing for Scott, who now lined-up alongside Pegher. Scott got a great restart on the outside to lead lap 17.

The 23-year-old Pegher wasn't about to surrender as he pulled even with Scott and the two raced side-by-side on laps 18 and 19. On lap 19 the duo made contact with Pegher getting by for the lead. Once back in front, Pegher pulled away by lap 21 and had a near half-straightaway lead when he took the checkered flag.

Scott and Angelicchio turned into their best ever Touring Series efforts in second and third respectively. Bobby Powell was fourth over John Watson. Carl McKinney was the night's hard charger as he worked his way from his 21st starting spot to finish sixth.