Diemel overcomes Hirt for $5,000 at Shawano 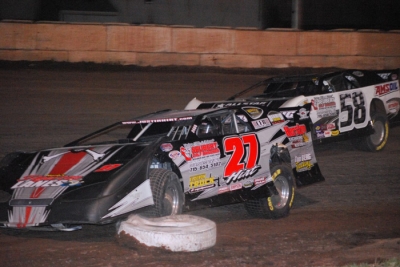 Polesitter Justin Hirt of Tigerton, Wis., led most of the way but settled for second while reigning track champion Troy Springborn of Shawano was third. Tom Naeyaert of Shawano and Dave Fieber of Neenah, Wis., rounded out the top five in Monday's feature, plagued by a stretch of cautions just past the halfway point.

Hirt took command early over Diemel, Paul Parker, Springborn and Fieber with Tim Buhler quickly breaking into the top five. A lap-10 caution bunched the field, and the twosome of Hirt and Diemel pulled away on the restart with Diemel using the high groove in an attempt to grab the lead.

Hirt fought off the challenge and subsequent challenges before the halfway point, and pulled away a bit before a lap-24 caution, the first of a half-dozen yellow over the next few laps. Two of the cautions included at least six cars apiece, with Parker and Buhler among the retirees.

On the last restart, Hirt clipped an inside tire barrier in turns one and two as Diemel again jumped to the high side. This time, Diemel made the pass stick and pulled away for the victory.