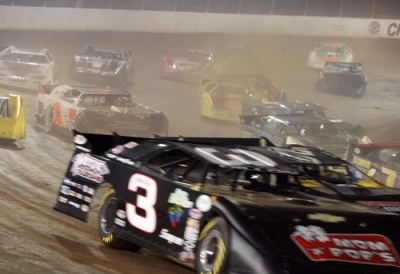 CONCORD, N.C. (May 22) — Keeping it all in the family, Austin Dillon of Welcome, N.C., led all 25 laps of a Fastrak Racing Series feature at the Dirt Track at Lowe's Motor Speedway for the third consecutive Fastrak victory by a Dillon at Lowe's. Austin won 2007's Fastrak event while his younger brother Ty captured last year's Memorial Day weekend event.

"I have to thank all of my guys," said Austin Dillon, whose grandfather Richard Childress of NASCAR fame watched. "My car was awesome. It was fun to drive. I want to thank the fans. We put that No. 3 up front."

The crowd, also on hand to watch the World of Outlaws sprint cars, saluted Dillon's victory by raising three fingers in the air in memory of Dale Earnhardt, who made the number famous driving for Richard Childress Racing.

Johnny Pursley of Clover, S.C., finished second followed by Kenny Peeples Jr. of Rural Retreat, Va. Chris Steele of York, S.C., and Dan Breuer of Mooresville, N.C., rounded out the top five. The feature was slowed by a pair of cautions for minor incidents with R.J. Otto on the first lap and Brandon Haley on the 17th lap.