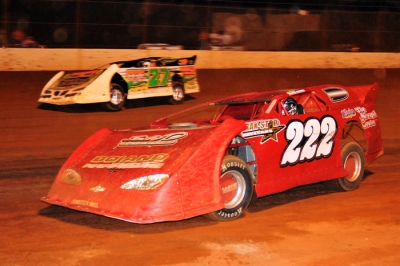 MERIDIAN, Miss. (May 2) — Sticking to his strategy, Mike Boland of Cuba, Ala., overtook Justin McRee of Woodstock, Ala., with six laps remaining and went on to win the Coca-Cola Classic 50 at Whynot Motorsports Park. He earned $2,500 for the NeSmith Chevrolet Dirt Late Model Series victory. | Slideshow

Boland was able to track down McRee in heavy lapped traffic, stayed planted on the bottom groove of the track, and took the lead when McRee jumped the cushion. A restart with four laps to go saw Boland move to the middle groove, and Eric Cooley of Fulton,Miss., got a run on the outside to challenge Boland for the lead on lap 48. Boland picked up the pace, and pulled away on the last lap to secure the win.

“Justin was all over the place in lapped traffic, and I stayed in my groove, and waited for it to open up and took the lead,” Boland said. “On that last restart, I knew Eric was coming on the outside, but I tried to stay in the middle where there was some moisture. Eric is a good clean driver, and I enjoyed racing with him at the end of the race.”

Cooley was the only driver in the race to stay up on the cushion on the high side of the track, and rode that groove to a second-place finish. That moved Cooley up to the second spot in the NeSmith Chevrolet Dirt Late Model Series National point standings, 22 points behind two-time series champion David Gentry of Lewisburg, Tenn., who finished 13th.

Two and three-wide racing was the rule as the 24-car field was split with one half using the inside groove, and the other half hanging it out on the high-side cushion. Murphy took the lead on lap one followed by Cooley, McRee, Boland, and Larry Boutwell of Baker, Fla. Boutwell drove inside Boland on lap three to take over the fourth spot, and McRee took second from Cooley. Cooley stayed with the outside groove and passed McRee for second on lap six.

Cooley quickly reeled in Murphy, and drove around the outside to take the lead coming off the fourth turn on lap seven. McRee stayed committed to the bottom groove, and got under Murphy for the second spot on lap nine. One lap later, McRee drove up to battle Cooley in a side-by-side battle for the lead.

The first of three cautions came out on lap 11 when Chris O’Connor of Cantonment, Fla., hit the third turn wall. Cooley lead the double-file restart with McRee, Murphy, Boland and Boutwell giving chase. Boland worked inside Murphy coming off the fourth turn on the restart to take over the third spot, as drivers were working high and low around the speedway. At the halfway point, things got busy with several position changes.

McRee had a side-by-side battle with Cooley going on for the lead, and he made the inside pass stick on lap 20, while Brindle was able to get by Boutwell to move up to the top five. On lap 22, Boland began to stick the nose of his car inside Cooley to challenge for the second spot. Boland used a lapped car as a pick, and got under Cooley for second coming off the second turn on lap 26.

McRee was in heavy lapped traffic, and had to get off his preferred bottom groove to pass them. McRee got into Gentry exiting the fourth turn on lap 33, but the two cars separated, and the field stayed green. Boland used patience in working the lapped cars, and stayed on the bottom of the track, passing lapped cars where he could.

McRee ran into more trouble on lap 44 when he jumped the cushion on the high side of turn three and hit the wall. Boland was there to take the lead, and McRee retired his race car to the pit area.

While most drivers had taken to the bottom groove in the last 10 laps, Cooley stayed up high in his quest of catching Boland in heavy lapped traffic. The caution flag came out on lap 46 when Brian Rickman of Columbus, Miss., spun in turn three.

Boland led Cooley, Brindle, Boutwell, Murphy and Turner back to the green flag. Cooley and Boutwell went to the outside groove, while everybody else stuck to the bottom of the track. Boutwell got too wide coming off the fourth turn on lap 47, and hit the front straightaway wall to draw the final yellow flag.

Cooley went back to the outside on the restart, and got things wound up on lap 48, as he pulled along side Boland going down the backstretch. Boland answered the challenge and pulled away to take his second series victory at Whynot, the track just across the state line from his Cuba, Ala., home.

Notes: Boland's self-designed Trak-Star Chassis is sponsored by The Strength Center and Boland Performance. ... Trak-Star swept the weekend with victories by Boland on Saturday and Bub McCool on Friday. ... Ten drivers finished on the lead lap Saturday. ... Rick Rickman earned hard charger honors for his 19th-to-seventh run. ... NeSmith Chevrolet competitors return to action Memorial Day weekend with events at Penton (Ala.) Raceway on May 22, East Alabama Motor Speedway in Phenix City on May 23, and Deep South Speedway in Loxley, Ala., on May 24.