Buckingham leads all the way in East Bay finale 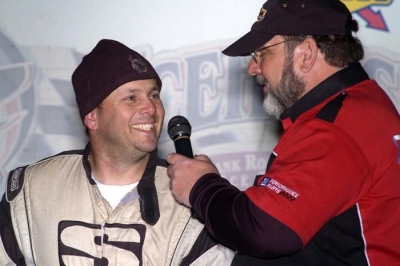 During one 11-lap stretch of green-flag racing, Buckingham was smoking the left-rear tire through the corners, and almost hit the wall going into turn three. That enabled Gentry to close in to challenge for the lead, but a caution flag slowed his efforts and let Buckingham cool down his hot tires.

“The caution flags came just right for me because on that long run early in the race, I knew David Gentry was there,” said Buckingham, who set fast time at East Bay for the second straight night. “I knew the left-rear was hot because it was hooking up so well that it almost pushed the right front into the turn-three wall. The track got a little harder than we expected.”

Although Gentry had to settle for second in the Eades Farms Warrior, he took over the point lead in the NeSmith Chevrolet series standings and holds a 10-point lead over Larry Boutwell of Baker, Fla.

Jack Nosbisch Jr. of nearby Riverview, Fla., finished third in the Adams Used Auto Parts Rocket, and Keith Nosbisch of Valrico, Fla., finished fourth for the third straight night in the Miller Lite Rocket. Jay Blair of Angie, La., who started 12th, rounded out the top five in the J&A Trucking Mastersbilt.

Doug Horton of Bruceton Mills, W.Va., looking for his third straight victory after wins Thursday and Friday at East Bay, started 13th and broke into the top 10 early. But he was involved in an accident on a lap-eight restart with Keith Nosbisch and Jeff Mathews, knocking him from contention when his No. 11 was towed to the pits.

Mathews was later disqualified in the aftermath of a lap-29 tangle with Phillip Cobb. Following the wreck, Mathews climbed from his car and assaulted Cobb as he sat in his race car. Series officials plan further disciplinary action regarding the actions of Mathews.

Notes: Buckingham's Bloomquist Race Car is sponsored by Rusty Wallace Toyota. ... Among the most serious cautions was a multicar pileup on the frontstretch on the eighth lap after Bryan Bernhardt's right-front suspension broke, sending him into the wall. Among drivers collected were Josh Peacock, Steve Gillman, Travis Varnadore and Derrick Rainey. ... Chip Brindle of Chatsworth, Ga., started fifth and ran as high as third early before spinning on the ninth lap. ... Steve Mathis spun out of the third position on the 26th lap. ... Fourteen of 24 starters completed 50 laps. ... Larry Boutwell rallied from 22nd to seventh to earn the Mechanix Wear Hard Charger honors. ... Next up for NeSmith Chevrolet competitors is an April 17-18 weekend in Columbus, Miss. The weekend opens with a $2,000-to-win event at Columbus Speedway on the east side of town, and closes with a $2,500-to-win event at Magnolia Motor Speedway just west of Columbus.