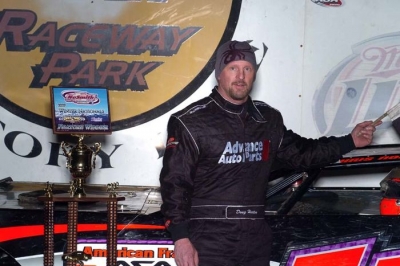 GIBSONTON, Fla. (Feb. 20) — Doug Horton of Bruceton Mills, W.Va., made it two in a row on the NeSmith Chevrolet Dirt Late Model Series at East Bay Raceway Park as he swapped the lead four times during the first half of the race with fast qualifier Shanon Buckingham of Morristown, Tenn., before pulling away for the $2,500 victory. | Slideshow

Horton, driving the Ken Nosbisch-owned Adams Used Auto Parts Warrior, took the lead for good on lap 21, pulled away, and left Buckingham to battle in a four-car war for the second spot with two-time series champion David Gentry of Lewisburg, Tenn., Keith Nosbisch of Valrico, Fla., and Jeff Mathews of Dover, Fla.

“Racing and swapping the lead with Shanon Buckingham through that lapped traffic was fun,” Horton said. “He’s good driver, and I knew he would race me clean. The track was a lot racier tonight, and my Warrior chassis handled perfectly wherever I wanted to go on the racetrack.”

Horton got the jump on the polesitting Buckingham to lead the first nine laps and quickly built a comfortable lead, but Buckingham caught him and used a lapped car as a pick in going ahead with an outside move on the 10th lap. Horton answered the move three laps later by going outside himself, but Buckingham wasn't done. The Tennessean slipped by in turn three to lead the 20th lap before Horton regained the point for good on lap 21. Buckingham was left to fight off Gentry's challenges the rest of the race, which was slowed by a single lap-34 caution for Chase Washington's turn-four spin.

Jason Wilson of Margaret, Ala., started 17th and finished seventh to earn the Mechanix Wear Hard Charger honors. The leading series rookie also took over series points lead by two points over Gentry and Larry Boutwell of Baker, Fla., who finished 20th in the McLeod Construction Rocket. Brad Hall of Knoxville, Tenn., entered the night leading the points but failed to make the feature lineup.

Notes: Horton will go for his third straight victory in the weekend finale Saturday at East Bay in a 50-lapper paying $3,000 to the winner. ... All but one of 24 starters were running at the finish with 13 drivers on the lead lap.