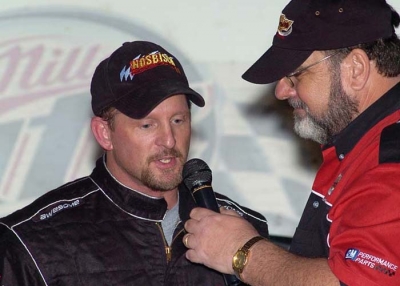 “I’ve got to thank Sanford Goddard at Warrior Race Cars for building a great race car, and my car owner Ken Nosbisch with his experience at the this racetrack, for the win tonight,” Horton said. “We came down here in December and missed the show, but everyone pulled together, worked hard, and we got it figured out.”

Steve Mathis of Plant City, Fla., finished second with Rick Rickman of Columbus, Miss., third. Keith Nosbisch of Valrico, Fla., was fourth and Jason Wilson of Margaret, Ala., rounded out the top five. Wilson moved up from sixth when apparent fifth-place finisher David Schmauss of Tampa, Fla., was found light at the scales during the post-race weigh-in. Provisional starter Derrick Rainey of Powder Springs, Ga., rallied from 24th to finish seventh and earn the Mechanix Wear Hard Charger award.

Two-time series champion David Gentry of Lewisburg, Tenn., set fast time and started on the pole, but he ran third in the early laps before a lap-12 spin knocked him from contention, and after cutting down a tire on lap 13, he retired a few laps later.

Notes: Horton made one start in a Joe Loudin-owned car earlier in the month during East Bay's Super Late Model action, but he failed to make the feature. ... Series points leader Brad Hall of Knoxville, Tenn., was running ninth when his overheating engine forced him out of the race after a lap-13 restart. ... Shanon Buckingham, December's series winner at East Bay, was running in the top five when he went pitside before the halfway point. ... Eight cautions slowed the feature action. ... Seventeen of 24 starters completed all 40 laps. ... The series runs another 40-lapper paying $2,500 to the winner on Friday and a Saturday 50-lapper paying $3,000 to the winner.