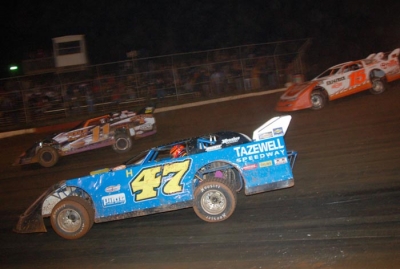 Hall became the first driver in the five-year series history to win with a GM Performance steel-head 602 Crate Engine, which was a 2-year-old $3,000 engine with the original factory-sealing bolts. Hall's engine sat in a 6-year-old Rocket Chassis towed to TST on an open trailer behind a half-ton pickup. | Complete Ice Bowl coverage | Slideshow

After starting fourth, Hall settled into the third spot by lap 11, and then chased down the top two cars of polesitter Scott Knowles of Lanett, Ala., and Danny Peoples of Margaret, Ala. Hall and Peoples traded the second spot on a pair of restarts on lap 16 and 28.

Knowles, Peoples and Hall raced off the second turn on lap 31 three-wide for the lead. People led the 31st lap, and then Hall took the lead exiting turn four on lap 32. Hall led the remaining eight laps for the $3,000 victory.

Peoples finished second followed by 17th-starting Owen Osteen of Woodruff, S.C. Jason Hiett of Lincoln, Ala., advanced 11 positions to finish fourth and Jason Wilson of Margaret, Ala., rounded out the top five. Knowles, the fastest of 87 qualifiers, spun in turn two on the 36th lap and ended up 23rd.

Knowles led at the outset over Tim Busha, David Gentry, Hall and Peoples. Following a lap-seven caution for Brian Ponder's spin, Peoples turned up the heat, working his way into the second spot by the 10th lap. Hall took third from Gentry on the 11th lap and action was slowed again on lap 16 when seventh-running Chris Tays slowed on the backstretch and collected an onrushing Ponder.

When the field went green for the double-file restart, Hall took the second spot from Peoples and they began to close in on Knowles amid traffic before a lap-28 caution for a Logan Yates-Lee Burdett tangle in turn three.

Action was tight up front on the restart with Knowles, People and Hall going three-wide for the lead exiting turn two on the 31st lap. Peoples drove around Knowles for the lead coming off the fourth turn, and brought Hall with him up into the second spot. Hall kept charging, and pulled along side Peoples on lap 32, and took the lead he would never relinquish coming off the fourth turn.

The fading Knowles spun in turn two on lap 36, collecting Jordy Nipper and drawing the last of four cautions. Hall kept Peoples at bay over the final laps for a 40-lap victory.