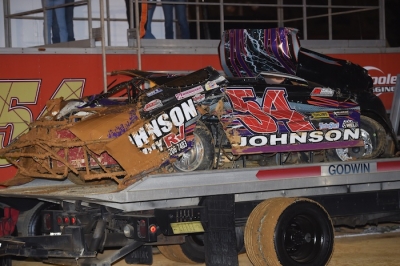 RURAL RETREAT, Va. — Jason Johnson’s multiple-rollover wreck on the frontstretch during Saturday’s Schaeffer Oil Southern Nationals time trials at Wythe Raceway had the feel of an accident that might require medical attention for the driver. | RaceWire

But nearly as soon as a track official got to the cockpit, word over the radio was that Johnson was OK, and a moment later the redhead popped out of the car and joined his girlfriend in the infield for an assuring embrace.

Johnson credited his Rocket Chassis, safety equipment and his team’s penchant for attention to detail when it comes to making sure the car can withstand the rigors of Dirt Late Model racing.

“The car done what it was supposed to do. The officials were there quick. Everybody did what they needed to,” Johnson said.

The Woodlawn, Va., driver said he backed off the throttle in turn three during qualifying when the carburetor stuttered, and he eventually tried to spin out to avoid more problems. But he couldn’t pick up enough fuel to trigger a spin and suddenly was headed for the outside wall.

“I thought, OK, I can just slap the side of the wall with the side of the car, shoot back to the bottom … but wrong place, wrong time, there happened to be an opening (in the guardrail) there, and that was it.”

From there Johnson went into rollover mode while snug in the cockpit.

The wreck didn’t even ring his bell, he said.

Just 10 days removed from his first Lucas Oil Late Model Dirt Series at Fayetteville (N.C.) Motor Speedway, Chris Ferguson of Mount Holly, N.C., appeared he was on his way to another five-figure victory in the Southern Nationals opener at Wythe.

Instead, Ferguson’s race ended during a lap-20 caution period when problems were discovered with his fifth-coil assembly, and he pulled to the pits, doomed to watch Vic Hill snag the $10,000 payday.

“I felt it actually when that big wreck happened (on lap 18 in turns) one and two, I drove through there and I felt it right then. Like the rear end kind of sagged. I didn’t want to take a chance at tearing up the car, because we’ve got a fast car right now. It’s been a trying year this year, but we’ve found some speed ever since we came home from Eldora (for early June’s Dream).”

Instead of taking home a big paycheck, Ferguson had to be happy to take home the knowledge that his car would’ve been tough to beat.

“The guys I passed, they’re not easy to pass, there’s no question about it. Especially at this track. Dale (McDowell) is one of the best, and the same thing with Brandon (Overton) and Ross (Bailes). I don’t know. It’s just frustrating.”

When Schaeffer Oil Southern Nationals founder and director Ray Cook was discussing his decision to outlaw some of the latest shock technology — air shocks and air dumps — he admitted he can see both sides the sport’s technical innovations.

On one hand, primarily as a promoter, he fears that technology is a discouragement to teams that don’t feel like they can keep up technically and financially. On the other hand, primarily as a racer, he knows the excitement of discovering news ways to a make a race car go faster.

While Cook believe racing is doing well overall and crowds are good, “I also see people fading who have been the sport a long time, because technology is just passing them (by),” Cook said. “In my mind, I would like to (rein in) that technology some, but I don’t know.”

Cook added: “From the racers’ standpoint, I love what’s going on. As a driver, it’s neat to (discover) that stuff, you know what I mean? But it also gets overwhelming where you just get discouraged.

“It’s just tough, it really is. Technology’s great, but I had a man tell me today, you can’t keep smart people out of the pits. And that’s true, too — But I’d like to try,” Cook said with a wink and a smile.

Cook also revealed he has a two-page wish list of things he’d like to institute on his series that would dramatically change the way things are done. But don’t expect to see it any time soon.

“It would either put me out of business or make me a hero, and right now I’m not ready to take that chance,” he said. “I told ‘em I might do it the last year I’ll (promote races), that way I’ll already be going out.”

Before this year’s Wythe victory, Vic Hill had won in 2009 and ’12 in Southern Nationals events at Wythe. … Three of Wythe’s top five finishers — runner-up Brandon Overton, third-place Steve Casebolt and fourth-place Shanon Buckingham — are among drivers expected to follow the 11-race through that wraps up July 29 in Tazewell, Tenn. … Donald Bradsher of Burlington, N.C., was part of three cautions in Wythe’s 53-lapper but still managed a seventh-place finish.