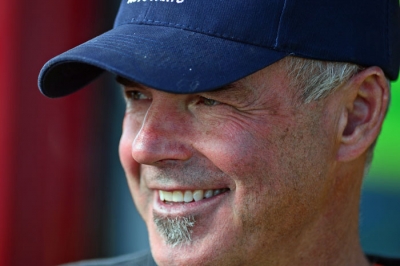 KNOXVILLE, Iowa (Sept. 24) — The blockbuster news Billy Moyer of Batesville, Ark., went public with on Thursday — his decision to retire from full-time Dirt Late Model competition upon the completion of the 2015 season — was actually months in the making. | Complete Knoxville coverage

“It’s been coming all year really,” Moyer said while standing outside his trailer in the Knoxville (Iowa) Raceway pit area minutes after his intentions had filtered out in a press release. “We just decided to announce it now because it’s getting to the end of the year.”

But while it wasn’t a huge secret in the Dirt Late Model world that the 57-year-old Hall of Fame driver had been contemplating pulling back the reins on his long, illustrious career behind the wheel, that didn’t make it any less surprising when he pulled the trigger and had his publicist, Ryan Delph, send out a press release confirming his plans a mere half-hour before the drivers’ meeting for Thursday night’s Lucas Oil Late Model Knoxville Nationals presented by Casey’s General Stores opener. Two of the people closest to Moyer — his 27-year-old Dirt Late Model-driving son, Billy Moyer Jr., and long-time crew member Steve Norris — didn’t even know that Moyer had made his announcement until they were informed of the news by a reporter.

“Yeah, he probably didn’t know that I released it today,” Moyer said when told that Junior was among the many caught by surprise. “I guess nobody really knew.”

But the elder Moyer knew. After more than three decades chasing dirt-track races across the country to make his living, he knew he had reached the point where his inner fire to keep up the hectic pace had begun to flicker too much.

“I just think the time is probably right now,” Moyer said. “My girlfriend and me were talking and decided what I was gonna do. I maybe should’ve did it in the beginning of the year to let people know all year long instead of getting to the end here, but …

“I don’t know … I’m doing these cars now (a new chassis-building business, Billy Moyer Victory Race Cars, with his uncle Carl Moyer of Karl’s Performance in Des Moines, Iowa) and there’s other things that I want to do. It’s kind of like what I said in the release — it wasn’t a whole big release or anything, but it’s just time to do a little bit of something else.”

Moyer certainly wants to place more of his focus on his fledgling race car enterprise, which he launched earlier this year. He understands that balancing a full-time driving career with building and marketing race cars is a difficult chore.

“It takes away from your racing program,” Moyer said of the dual roles. “I think Darrell (Lanigan) and (other drivers) have found out. You can definitely work better (to help customers) if you’re not trying to work on your own car and make all these decisions all through the night.”

With his own racing no longer his No. 1 priority, Moyer will likely free up more time to spend in Iowa being hands-on with chassis development.

“I’m still in Arkansas mainly, but I’m back-and-forth a little,” Moyer said. “This winter I made quite a few trips up there when we was doing the (chassis) jig and everything. I need to be up there all the time if I could be, but I got a lot of stuff in Arkansas to liquidate somehow so we’ll have to see what happens there.”

Of course, the never-ending strain — physical, mental, financial — associated with racing on a full-time basis has taken its toll on Moyer.

“I’ve done it a long time, and the rules and stuff just seem like they’re getting so far out of hand with the cost that it takes and the engineering stuff that’s coming into the thing,” Moyer said. “It’s just way out there. I think people know on some of this rule stuff there needs to be some adjustments made to where it puts the driver back into it instead of how much money you can spend.

“It’s just almost better to walk away than to try to keep battling it after all these years. That’s kind of the way I look at it. I just think that they have to make a lot of adjustments in the rules to back off on some of the costs that are going on. I know I could’ve never done it without the people on my car who’ve helped me. I’d have had to quit a long time ago.”

Moyer paused. He considered all his great accomplishments — 804 feature wins, including virtually all the sport’s biggest races — that rank him as arguably the best Dirt Late Model driver of all time and rightly expressed satisfaction with all that he’s done, but at the same time he noted the sacrifices he has made to achieve his lofty position.

“There’s just got to be a time where you’ve just had enough,” Moyer said. “It’s been great for me. I’d love if I could start all over tomorrow at 20 years old again. I’d probably do the same thing again — it’s in your blood and you love it — but you do miss so much of family stuff. Junior’s been with me growing up as a kid working on the car and now he’s racing, so lucky for me that we can be here side-by-side and I can have a lot of fun with him, where if he had normal life at home, a normal job, I’d never see him. Now it’s sort of the same way I did it back when he was 12 years old, having him with me at the races.

“But with his baseball games and stuff like that (during Junior’s childhood), I went to some of them, but far from all of them. Stuff like that, you don’t ever get that back.

“This dirt world, it’s tough,” he continued. “It’s not the NASCAR world where we have jets and everybody doing all the work for us. It’s just tough, and it just gets tougher and tougher. I’ve battled it all this time … I don’t know anybody out there who has put in the years that I’ve put in probably. There’s just a time … it’s just getting tiring. It’s just a lot of work to try and stay on top of all this stuff going on. It’s just out of control. I mean, people don’t realize the adjustments on these cars nowadays — there’s thousands of ‘em that make a difference. My head’s just tired from it all.”

Moyer doesn’t plan to leave the cockpit cold turkey. He expects that he will still enter some races in 2016, but at this point he’s not certain about how many. All he knows about next year right now is that he will continue to visit racetracks to assist his son and Victory Race Car customers and his own racing endeavors will become clearer after an off-season of introspection.

“I don’t really know how many races I want to run next year to tell you the truth,” Moyer said. “When the year gets over I’m gonna go out west where I go and play in the sand (at California’s Glamis Sand Dunes) with my little sand car I got and just get my head clear and neutralized, have some fun, and then I’ll just decide from there what I’m doing. We might run some more, we might not. We’ll just have to see.”

Moyer was asked what would happen if his Thursday announcement were to be followed by a $40,000 victory in this Saturday night’s Late Model Knoxville Nationals, his native state’s biggest Dirt Late Model event. Could he possibly duplicate last year’s storybook performance by Brian Birkhofer of Muscatine, Iowa, who passed Scott Bloomquist of Mooresburg, Tenn., on the final lap to win the Nationals and then walked off into an unexpected retirement?

“Well, if that happens, I might do what he done and just leave and be done,” Moyer said with a laugh.

“It’s just almost better to walk away than to try to keep battling it after all these years. That’s kind of the way I look at it. … I know I could’ve never done it without the people on my car who’ve helped me. I’d have had to quit a long time ago.”