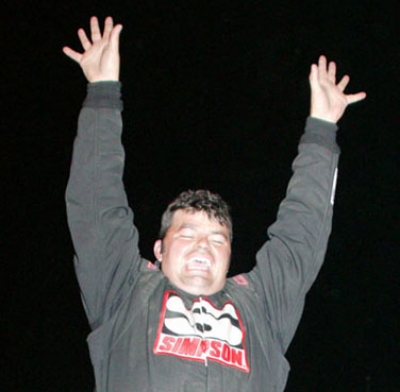 COLUMBUS, Miss. (Oct. 20) — The driver from Star, Miss., truly became a star at Magnolia Motor Speedway. Winning the richest race of his career, Jason Cliburn earned $15,000 with a dramatic victory in the Coors Light Cotton Pickin' 100 at the 3/8-mile oval west of town. | Slideshow

Cliburn took the lead from Chris Wall of Holden, La., with just two laps remaining and guided his Cliburn Tank Lines-sponsored GRT to what turned out to be a controversial victory.

The polesitter for the 100-lapper, Cliburn had problems with a faulty battery and made an early trip to the pits. There was disputes over whether Cliburn went a lap down during the first half of the event, and officials reviewed videotape early Sunday morning to determine if he indeed was on the lead lap.

Regardless, Cliburn's victory was celebrated in victory lane following the race.

After one-lane track conditions on Friday night, the venue was well-groomed an Saturday, providing an entertaining, competitive racing surface throughout heat races and for the majority of the 100-lap main event.

Wendell Wallace would be the event's first leader, with Dane Dacus and Cliburn in tow. The first caution would fall for Cliburn's battery failure on lap three, and the ensuing restart brought mass carnage in turn four with a pileup involving at least seven cars. Cliburn returned to the race under the red-flag period.

The race resumed with Wallace starting ahead of Dacus, Ronny Lee Hollingworth, Jason Smith and Shane Clanton. Clanton drove between Dacus and Hollingsworth to take second place briefly on lap seven, then secure the spot on the following lap.

Wallace began to navigate lapped traffic on lap 13, with Clanton moving in on lap 15 as Billy Moyer made his way into the top five. Moyer would hold third place by lap 22 with Chris Wall moving into fourth.

Clanton began to race with Wallace for the lead about lap 30, taking over the spot with a pass in turns one and two on lap 31. (This is the same stretch of laps when some believed Cliburn might've gotten lapped)

Wallace went for the lead again on lap 49 and solidified the spot just before a lap 51 caution fell for Jimmy Cliburn. Clanton pulled into the pits under caution and returned to the race at the tail of the lead lap with Wallace leading Wall, Moyer, Smith and Bub McCool in the top five.

Clanton wasted no time charging back up to sixth following the restart. McCool moved to third on lap 55, then gave the spot back to Moyer four laps later with Clanton also driving around to tke fourth.

Wall chased down Wallace and began a battle for the lead he eventually won on lap 74. Wallace continued in second but, on an attempt to regain the lead on lap 84, he spun in turn four to draw a caution.

Wall led Smith, Jason Cliburn, Moyer and Drake back to the green flag. Drake moved into third on the lap-85 restart and Cliburn began tracking Wall.

With the track surface mostly used up and down to one lane for the final stretch, Cliburn raced hard on Wall's tail until the leader's No. 71 machine slipped out of the rubber in turn four on lap 98, allowing Cliburn to slip by. Cliburn went on to take the victory, followed by Wall, Drake, Moyer and Clanton in the top five.