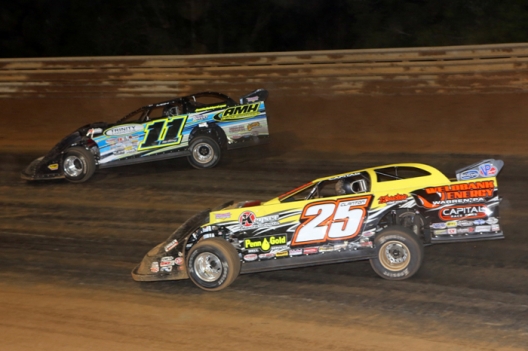 JAMAICA, Va. (May 16) — Shane Clanton of Zebulon, Ga., emerged from a three-car battle in the late stages of Saturday’s TireX USA 100, pulling away to lead the final nine laps at Virginia Motor Speedway for his first career Ultimate Super Late Model Series victory.

Pocketing $10,000, Clanton picked up his sixth checkered flag of the season but first since his dominating performance at Florida Speedweeks on the World of Outlaws Late Model Series at Volusia Speedway Park.

Polesitter Austin Hubbard of Seaford, Del., controlled most of the 50-lap distance, but with 10 laps remaining he had his hands full with Ultimate Series points leader Casey Roberts of Toccoa, Ga., and Clanton, who pressured the frontrunners in the lower groove.

Clanton finally slipped past Roberts, then slid in front of Hubbard exiting turn two with eight laps remaining and pulled away the rest of the distance. Hubbard held on to finish second while Roberts, who nearly got into the fence the moment Clanton took the lead, finished third.

“We kind of set up after the heat race there to run the bottom there. The middle kind of blew up a bunch of stuff there and I could just catch myself leaving the corner, I could just gain on 'em a little bit. We were just biding our time in getting to the front there, and just took chances when we did, and took advantage when we needed to.”

Behind Clanton, Hubbard and Roberts, Rick Eckert of York, Pa., was fourth and 17th-starting Jeff Smith of Dallas, N.C., rallied to finish fifth. Chris Ferguson of Mount Holly, N.C., last year’s USA 100 at Virginia Motor Speedway, was running second when his car rolled to a stop on the frontstretch on lap 29.

Hubbard got the jump on fellow front-row starter Kyle Hardy of Stephens City, Va., at the outset, taking control with Hardy, Roberts, Dustin Mitchell and Ferguson in pursuit.

Behind the leaders, the most serious caution of the race appeared on the second lap when Dennis “Rambo” Franklin spun in turn two, collecting several drivers including Gregg Satterlee and Kyle Lear.

On the restart, Roberts moved into second over Hardy while Mitchell and Ferguson battled for the fourth position as Clanton picked his way forward from his fifth-row starting spot.

Dustin Mitchell pulled up lame in turn four to fall from contention on the 16th lap. On the restart, Hubbard, Roberts and Ferguson were the first three drivers through turn two as Clanton slid in front of Hardy to grab fourth, leaving Hardy up in the soft stuff as he was shuffled out of the top 10.

Mason Zeigler worked into the top five before a caution for Ross Robinson, and a few laps later Ferguson’s car lost power exiting turn four and set up the three-car battle in the late stages among Hubbard, Roberts and Clanton.

Notes: No driver has repeated in the USA 100 during its time at VMS. … Kerry King and Brian Tavenner each brought out cautions on the race's initial start. ... Mason Zeigler spun on the final lap, collecting Gregg Satterlee. ... Eight of the 26 starters completed all 50 laps. ... Health problems prevented race founder Ernie Shelton from attending the race. Before moving to VMS, the event was held for many years at Beckley (W.Va.) Motor Speedway. … Daniel Baggerly of Rural Retreat, Va., outran Walker Arthur of Forest, Va., for the Fastrak Racing Series tour victory in the Crate Late Model feature. … VMS takes Memorial Day weekend off before returning to its regular-season racing May 30.