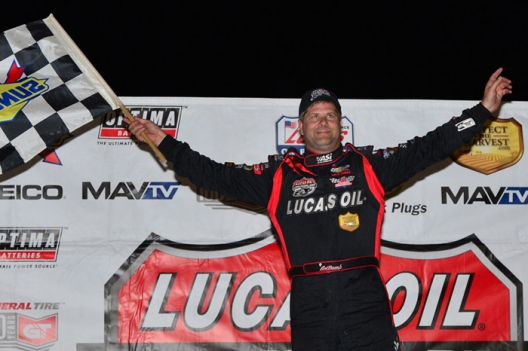 “I wasn’t gonna get off that bottom,” Pearson said of the third-mile oval’s inside lane. “I don’t care what was gonna happen.”

Pearson, 43, stayed true to his word, using the inside groove to surge ahead for good on lap 29 after a furious 16-lap, side-by-side duel for the lead with Erb. The four-time Lucas Oil Series champion controlled the remainder of the distance to score his third triumph of the season on the national tour and pad his points lead in his so far very successful return campaign with the Dunn-Benson Ford team.

The 16-minute race’s lone caution flag, on lap 19 for debris on the track, provided Pearson an opportunity to plot how he wanted to deal with Pearson. He didn’t need the break, however.

“I just decided I was gonna run right around them tires, just like I did at Granite City (Ill.),” said Pearson, recalling his fast-closing second-place finish in the May 1 Lucas Oil Series event at Tri-City Speedway. “We had the same set up on it.”

Pearson cruised to the $10,000 checkered flag over Jimmy Mars of Menomonie, Wis., who steadily advanced from the seventh starting spot to finish second in the first Lucas Oil Series event in his home state since 2006 and the first-ever tour stop at Oshkosh. He overtook Erb on the final lap to grab the runner-up spot.

Erb settled for a third-place finish after starting second and leading 26 of the race’s first 28 laps, falling short of sweeping the night after setting fast time and winning a heat race. Devin Moran of Dresden, Ohio, moved forward from the 10th starting spot to finish fourth and 14th-starter Jared Landers of Batesville, Ark., completed the top five.

Pearson wore a big smile after guiding his Black Diamond Race Car to victory lane in his first visit to Oshkosh, which boasted a huge turnout of fans for its historic event.

“I’ll tell you what, it was one heck of a race with Dennis,” said Pearson, who started third and nosed ahead of Erb to lead laps 22-23 before seizing command on lap 29. “We gave each other plenty of room. I was running the bottom of four, so he stayed out on the top there. I probably could’ve maybe went up there and slid-jobbed him a little bit, but you know, he races me clean, I’m gonna race him clean.

Pearson was especially impressed with the track, which joined the Lucas Oil Series schedule this season thanks to La Salle (Ill.) Speedway promoter Tony Izzo Jr., who organized the event.

“I love this place,” said Pearson, who registered his 30th career victory on the Lucas Oil Series. “It’s like Granite City and Magnolia (Motor Speedway in Columbus, Miss.). You can race all over it. It’s wide. What a beautiful place.

Erb, 42, put up a gallant fight to keep Pearson behind him but didn’t have quite enough race car left to finish the job.

“We had a good car early to start off,” said Erb, who is searching for his first non-Speedweeks Lucas Oil Series triumph since June 20, 2013, at Swainsboro (Ga.) Raceway. “We kind of had to get up on top there, and once that got too far up around there we kind of were struggling after that. We needed to be able to run through that black in the center and we just weren’t able to do that.”

Erb enjoyed his clean race with Pearson, however, and sees a victory in his near future.

“It’s good to have somebody there that respects you,” Erb said. “We respect each other there and can have a good battle like that, each take our own lines and battle it out.

“It was good to be up there battling it out. We’re working on a lot of stuff and changing up a lot of things trying to get this thing better, and I think we’re going in the right direction.”

The 43-year-old Mars was satisfied with a second-place outing after carefully picking his way toward the front.

“We had a pretty good car, it’s just the new tire combinations we gotta run (under Lucas Oil Series rules) kind of throw you for a loop on how hard you need drive it,” Mars said. “We probably had more left in the car, but at the same time, you can definitely have them tires fade so I just tried to discipline myself and not burn the tires off. I was happy with second.”

Notes: Polesitter Don O’Neal of Martinsville, Ind., chased Erb until being overtaken by Pearson and then faded to a sixth-place finish. … Jimmy Owens of Newport, Tenn., and Jonathan Davenport of Blairsville, Ga., were forced to bring out backup cars after experiencing trouble in time trials. Neither recovered from the early woes; Owens placed 14th in the feature and Davenport was 15th, leaving them third and fourth, respectively, in the Lucas Oil points standings. … Series regular Chris Brown of Spring, Texas, received 75 hardship points after his flight to Chicago was cancelled, keeping him from running the event. … Chad Simpson of Mt. Vernon, Iowa, who won Oshkosh's last Super Late Model touring special last August on the Corn Belt Clash circuit, finished eighth. … With the World of Outlaws Late Model Series idle for the weekend, Tim McCreadie of Watertown, N.Y., made the 12-and-a-half-hour haul to Oshkosh from his Sweeteners Plus team’s shop in Avon, N.Y. He wasn’t a factor, finishing 13th after qualifying through a B-Main. … The Lucas Oil Series moves on to La Salle Speedway for another $10,000-to-win event on Saturday night.