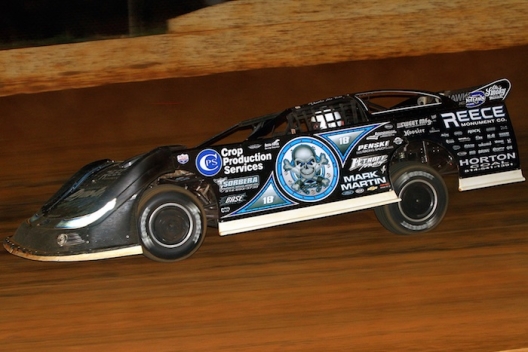 MARYVILLE, Tenn. - May 9, 2015 - Scott Bloomquist made winning Saturday night's Mountain Outlaw 50 Presented by NAPA look easy, but there was so much more that went into his dominating performance than the 50 flawless laps he ran around Smoky Mountain Speedway.

After struggling to get his self-designed Sweet-Bloomquist car to perform to his liking for most of the season, Bloomquist, 51, of Mooresburg, Tenn., and his team undertook a complete rebuild on the car in preparation for Saturday's World of Outlaws Late Model Series event. The hard work paid off with Bloomquist cruising to a $10,125 victory in front of a near-capacity crowd at the East Tennessee oval.

"We worked all week on this car," said Bloomquist, the 2004 WoO champion who recorded his second series victory of the season and 28th of his Hall-of-Fame career. "We'd been having trouble with it, so this week we stripped it down completely to the frame, cut it in three pieces and put it back together. I was pretty confident it was gonna run good tonight."

Bloomquist was dominant all night in his Reece Monuments-sponsored ride. He posted the fastest time in his qualifying group, led every lap of his heat race and controlled the entire distance of the 50-lap A-Main after drawing the pole position in the night's top-eight redraw. He built a lead of more than seven seconds during a 30-lap green-flag run and pulled away from Ray Cook of Brasstown, N.C., and Darrell Lanigan of Union, Ky., after the race's final restart on lap 32.

"It's nice when they run a big race here and we can win," said Bloomquist whose shop is roughly an hour-and-a-half drive from Smoky Mountain Speedway. "We go home feeling good and got our confidence high knowing we got two really good race cars."

The second-starting Cook settled for the runner-up finish after holding off a fierce challenge from Lanigan, who advanced from his fifth starting spot to finish third. Tim McCreadie of Watertown, N.Y., rallied from the 17th starting position to finish fourth with 10th-starting Chub Frank of Bear Lake, Pa., placing fifth for his second top-five run in as many nights.

"He shows up every now and then and spoils the show," Cook said of Bloomquist's impressive performance. "He's had a good year, but not to his standards. He's back rolling now it looks like."

After moving into third on lap 21, Lanigan pressured Cook for most of the second half of the race. The three-time and defending WoO champion felt his Cornett-powered Club 29 house car was capable of running with Bloomquist, but he never got the chance to show it as he failed to find a way around Cook.

"I would've liked to have got up there and raced with (Bloomquist) at the front," said Lanigan, who is still looking for his first WoO victory of the season after last year winning a single-season record 17 series races. "It was a little hard to pass, but we had a pretty good hot rod."

Lanigan's third-place effort moved him back ahead of fellow three-time WoO champion Josh Richards of Shinnston, W.Va., for second in the series standings. Richards, who finished sixth in Saturday's race, trails Lanigan by two points. The two past champions are chasing Shane Clanton of Zebulon, Ga., who now leads the chase by 90 points after a seventh-place finish on Saturday.

Jimmy Owens of Newport, Tenn., was eighth at the finish of Saturday's A-Main with 18th-starting Mike Marlar of Winfield, Tenn., and Steve Francis of Ashland, Ky., rounding out the top 10 in a race slowed by two cautions.

Frank Heckenast Jr. of Frankfort, Ill., saw a potential top-five finish go awry when his right-rear tire blew out and caused the lap-32 caution. The 2014 WoO LMS Rookie of the Year ended up 15th at the finish. Dale McDowell of Chickamauga, Ga., was also denied a top five when he slowed from fourth with two laps remaining.