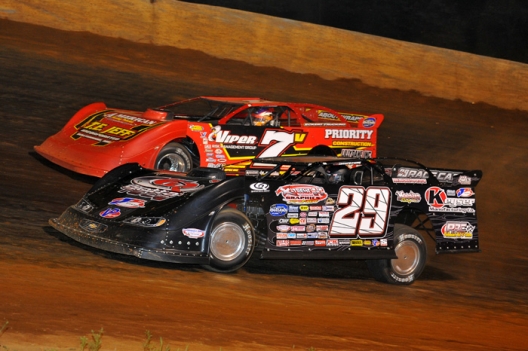 JUNCTION CITY, Ky. (May 8) — It had been nearly two years since Rick Eckert of York, Pa., captured his last World of Outlaws Late Model Series victory. But the former series champion made his way to victory lane Friday night, capturing a $10,000 triumph in his first ever appearance at Ponderosa Speedway.

Advancing from the third starting position, Eckert overtook race leader Darrell Lanigan of Union, Ky., on lap 30, leading the remaining distance for his first tour victory since July 2013. After getting off to a slow start to the 2015 season, Eckert said the win couldn’t have came at a better time for him and his Paul Crowl-owned race team.

“We really needed that,” Eckert said. “We’ve struggled all year. Last week I made some changes. We ran so bad the first night that I needed to do something drastic. I did something drastic the next night and we qualified fairly decent and we ran fifth, so that was the best we’ve run all year in a tour race.

“So we carried that over to this week and added a little bit to it and come here and set fast time, which was pretty cool. We run second in our heat, but it was pretty hard to get the jump from the inside. And then come back and caught Darrell (Lanigan) there, he was in traffic heavy. It’s bad for the leader when they’re in traffic. We snuck around him there … it’s hard to do that, it’s hard to pass that guy.”

While second-starting Lanigan jumped to an early lead, he would be among the race’s early retirees after he and third-running Shane Clanton of Zebulon, Ga., made contact on lap 30, collecting Justin Rattliff of Campbellsville, Ky., to draw a caution.

“After me and (Darrell) Lanigan got together, we were just lucky to survive and run second,” Clanton said. “Second place, we’re tickled. It’s a good points night, gets us back to what we had a Farmer City, so we’re good.”

After falling victim to last Friday’s Josh Richards-Casey Roberts scuffle at Friendship Motor Speedway and spending most of the past week making repairs, Frank said he was pleased with his third-place run.

“It was pretty good considering,” Frank said. “We wrecked a car last week and had to fix it this week. I wasn’t sure what we had, if it was going to be back to where it was, because it’s been pretty good. But it showed tonight. We changed some stuff around for the feature and the car actually was pretty good. That restart we probably didn’t need. We had a chance to win right then. We started 12th, got third, so it’s not a bad night.”

The race was slowed by five cautions. The first yellow flew on the first lap when Brandon Kinzer of Allen, Ky., spun in turn two. Sixth-running Dustin Linville of Bryantsville, Ky., drew a lap-11 caution when he fell off the pace down the frontstretch with mechanical issues. Lanigan and Clanton collided, collecting Rattliff for a lap-30 yellow. Another yellow flew on lap 32 for a tangle involving Frank Heckenast Jr., Tim McCreadie, Chase Junghans, Brad Neat and Brandon Overton. Polesitter Mason Zeigler drew the final caution on lap-44 when he slowed with a flat right-rear tire.