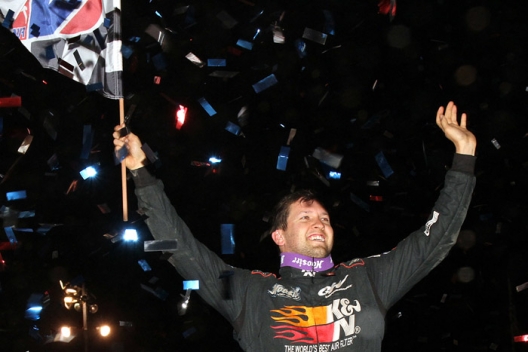 One night after scoring a breakthrough WoO triumph at Friendship Motor Speedway, Ferguson, 25, of Mount Holly, N.C., led every lap of Saturday's Tar Heel 100 main event at Fayetteville Motor Speedway to complete a sweep of the national tour's weekend doubleheader in North Carolina.

Much like he did Friday at Friendship in Elkin, N.C., Ferguson dominated the entire program at Fayetteville, setting fast time in qualifying, running unchallenged in his heat race and dominating the majority of the 50-lap A-Main. He cruised through most of the race in his Clements-powered Longhorn Chassis and smoothly handled lapped traffic on his way to a $10,050 victory.

"This is unbelievable. It's the greatest weekend of my whole life," said Ferguson, who became just the second repeat WoO winner of the season. "This car is amazing. I'm not even doing nothing special. The car is so fast, I'm just holding the steering wheel."

Leading WoO rookie Brandon Overton of Evans, Ga., equaled his best career finish on the circuit with a runner-up performance. Darrell Lanigan of Union, Ky., ran second for much of the way but slid back to third after a back-and-forth battle with fourth-place finisher Steve Casebolt of Richmond, Ind. Rick Eckert of York, Pa., rounded out the top five in a race slowed by six cautions.

Starting from the pole, Ferguson easily pulled away from Lanigan and Josh Richards of Shinnston, W.Va., early in the race and built more than a half-straightaway advantage before lapped traffic slowed his pace around lap 10.

Ferguson struggled to overtake the slower cars using the track's preferred low groove, allowing Lanigan and Richards to close the gap. Langian pulled alongside Ferguson exiting turn two on lap 13, but Ferguson charged the top of the track entering turn three on that lap and pulled back ahead.

The move to the outside line also allowed Ferguson to begin passing traffic more easily, and he soon began to ease away from his challengers.

"I was kind of worried because I wasn't sure how good the top was," Ferguson said. "Everybody was running the middle to the bottom. I thought I might have saw (Lanigan) on the left side of me coming off of two one time, so I just started pressing the issue and driving in as hard as I could. I thought I was gonna be over there on the dragstrip a few times going into turn one."

The fourth-starting Overton faded early in the race, dropping as far back as seventh before charging forward after the halfway mark. He moved by both Lanigan and Casebolt to take second following a lap-33 restart. But he never could mount a serious challenge on Ferguson and instead had to hold off a resurgent Lanigan in a side-by-side finish for the runner-up spot.

"That wasn't too bad," said Overton, whose previous second-place WoO finish came in the tour's season opener at Screven Motor Speedway in Sylvania, Ga. "We definitely got the car a little better. We just gotta keep digging and we'll keep getting better."

Dennis Franklin of Gaffney, S.C., finished sixth in the final rundown, while Richards slid back to seventh after running third for much of the race. Eric Wells of Hazard, Ky., was eighth, while points leader Shane Clanton of Zebulon, Ga., salvaged an otherwise forgettable night with a ninth-place finish. Johnny Pursley of Clover, S.C., rounded out the top 10 finishers.

The World of Outlaws Late Model Series returns to action Fri., May 8, with its first ever visit to Ponderosa Speedway in Junction City, Ky., for a $10,000-to-win program at the 3/8-mile track. The series then moves to Smoky Mountain Speedway in Maryville, Tenn., on Sat., May 9 for another $10,000-to-win event, the Mountain Outlaw 50 Presented by NAPA.