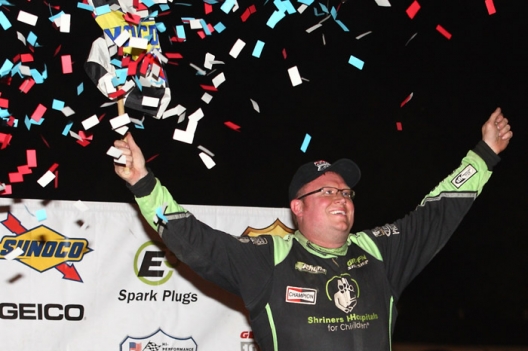 “I love this place,” asserted the 36-year-old from Bloomington, Ill.

Indeed, the high-banked, 3/8-mile oval continued to treat Feger well. After inheriting the lead on lap 18 when race-long pacesetter Jonathan Davenport of Blairsville, Ga., slowed with a flat right-rear tire, Feger turned back challenges from defending Lucas Oil Series champion Don O’Neal of Martinsville, Ind., to capture the national tour’s Paducah stop for the second consecutive year and tally his fifth overall special-event triumph at the track since 2008.

“We can have one of these every weekend,” said a smiling Feger, who earned $10,000 for his first victory of 2015 and his third career score on the Lucas Oil Series.

With his right wrist “still not 100 percent” after he needed reconstructive surgery on it in January due to a fall on icy ground, Feger manhandled his Hustler Race Car to a winning margin of 0.801 of a second over the 50-year-old O’Neal.

Though Feger, who started from the pole position, was outgunned for the lead at the initial green flag by his front-row mate Davenport, he still had a good feeling about his chances.

“I knew Davenport couldn’t keep up that pace without something happening — and it did,” Feger said of the flat tire that doomed Davenport, who finished 12th after returning from his lap-18 pit stop. “This place is tough to run the top for 50 laps like that. He was up there a little harder than I was, and I was just trying to be patient and save my tires because I’ve been leading plenty here and had flats.”

Once in command Feger faced heavy pressure from O’Neal, who started sixth and finally secured second place just before Davenport’s misfortune. The most memorable moment of the Feger-O’Neal showdown up front came following a lap-21 caution flag for Chris Simpson of Oxford, Iowa, when O’Neal’s bid to grab the lead was short-circuited by contact between him and Feger.

After O’Neal pulled a slider through turns one and two to momentarily forge ahead of Feger off the corner, Feger dove to the bottom and the two drivers banged together in the middle of the backstretch. They continued racing side-by-side through turns three and four and made more contact on the homestretch, with Feger surviving to remain the leader.

O’Neal stayed within striking distance of Feger for the remainder of the distance but never mounted as serious a threat as he did on the lap-21 restart. The veteran spent most of his time fighting a torrid three-way battle for second with Owens and Pierce a few car lengths behind Feger, who held on to add another Paducah flourish to his resume.

“I looked down and seen them guys,” said Feger, whose Paducah successes also include two MARS DIRTcar Series victories (2012 and ’13) and a Northern All-Stars score in 2008. “It’s a tough place, and I just tried not to worry about them and run my own line, keep the tires under the car and not get too sideways and get that good run off the corners. That makes it awfully hard for a guy to pass coming off the bottom.”

Fever felt fortunate to survive his mid-race scrape with O’Neal.

“Me and O’Neal tangled it up a little on the backstretch,” Feger said. “He slid me a little bit and we bumped down the backstretch, but this place is really hard to go straight down the straightaways especially when you got a car next to you taking some side air. The cars really want to sit down and drive you down the track … and obviously he’s racing for points, so I’m sure it’s just hard racing at a tough track.”

O’Neal didn’t appear to be too accepting of the contact with Feger when he was interviewed by Lucas Oil Series announcer James Essex in victory lane following the race.

“Especially that first one down the backstraight,” O’Neal said, not cracking a smile as he recalled the lap-21 paint-trading with Feger. “He sort of roughed me up there a little bit. I gave him plenty of room on the outside … aw, well, it’s part of it.”

While O’Neal fell short of his second Lucas Oil Series victory of 2015, he did register his second consecutive top-five finish and ended the weekend fourth in the points standings, just 50 markers behind leader Earl Pearson Jr. of Jacksonville, Fla., who finished sixth.

The Lucas Oil Series returns to action on May 15-16 with a Midwestern doubleheader at Oshkosh (Wis.) Speedzone Raceway and La Salle (Ill.) Speedway.