Information provided by: Series and staff reports (last updated May 3, 8:29 am)
Bloomquist wins thriller at Tri-City for $10,000
Spring Spectacular 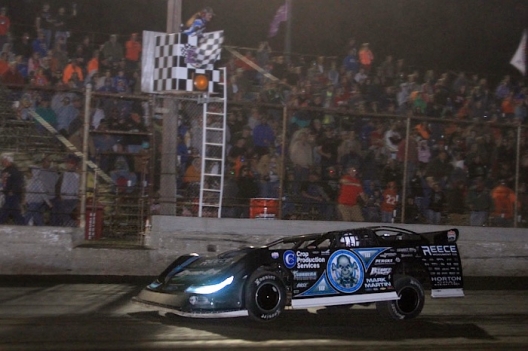 PONTOON BEACH, Ill. (May 1) — Scott Bloomquist of Mooresburg, Tenn., spent the first 35 circuits of Friday night’s 50-lap Lucas Oil Late Model Dirt Series Spring Spectacular at Tri-City Speedway in the thick of a battle royal at the front of the pack.

But then the 51-year-old veteran seized control following the race’s lone caution flag, overtaking a fading Bobby Pierce of Oakwood, Ill., for the lead on lap 37 and turning back a last-ditch challenge from Earl Pearson Jr. of Jacksonville, Fla., to earn his first victory of 2015 on the national tour.

Bloomquist collected $10,000 for his hard-earned triumph, which came after he swapped second place behind Pierce several times with Shannon Babb of Moweaqua, Ill., and Jonathan Davenport of Blairsville, Ga., before finally breaking free.

“It was one heck of a race, that’s all I know,” said Bloomquist, who captured the 3/8-mile track’s spring Lucas Oil Series event for the second consecutive year. “I was enjoying watching it and being part of it.”

Pearson, 43, chased Bloomquist for the race’s final 10 laps after slipping past Brandon Sheppard of New Berlin, Ill., but didn’t draw close enough to threaten the Hall of Famer until the last circuit. Sliding to the outside of Bloomquist rounding turns three and four, Pearson crossed the finish line 0.565 of a second behind the victor.

The 22-year-old Sheppard settled for a third-place finish after briefly running in the runner-up spot before ceding the position to Pearson. Clint Bowyer Racing teammates Don O’Neal of Martinsville, Ind., and Steve Francis of Ashland, Ky., finished fourth and fifth, respectively, with strong surges forward in the closing laps.

Bloomquist, who started third, reached second for the first time with a lap-15 pass of Davenport but lost the spot two circuits later to Babb. The former Lucas Oil Series champion regained second on lap 30 as Babb fell off the pace — and ultimately retired — with damage to the nose of his car from a bout with an inside marker tire and was pressuring the 18-year-old Pierce for the lead when the caution lights appeared on lap 35 for ninth-place Jared Landers of Batesville, Ark., sitting backwards in turn three.

The restart saw the race’s complexion change dramatically. With Pierce, who started fourth and had set the pace since passing the polesitting Babb on lap three, clearly laboring due to crushed right-rear bodywork on his car, Bloomquist shot into the top spot on lap 37 and never looked back.

Bloomquist noticed the sheet-metal damage that snuffed out the hopes of Pierce, who tumbled rapidly from contention over the remaining circuits and finished 15th.

“When he gets settled down a little bit more and keeps the body on it, he’s gonna be tough,” Bloomquist said of Pierce, who was seeking his third career Lucas Oil Series victory. “He’s already tough. All these guys are getting tough to race with, but you just gotta keep working and stay on your game.”

Keeping his Sweet-Bloomquist Race Car stuck to the inside groove, Bloomquist built a short edge on the field after assuming command.

“When we could finally get ahold of something we could get the throttle down pretty hard and it would launch pretty good off these corners,” said Bloomquist, who decided to switch cars for Tri-City’s action after struggling to a 14th-place finish in the previous night’s Lucas Oil Series stop at Macon (Ill.) Speedway.

While Pearson managed to erase his deficit to Bloomquist and pull alongside the leader on the final lap, Bloomquist was blissfully unaware of challenge.

“We were just staying focused,” Bloomquist said. “I didn’t know where anybody was at and was just trying to make sure we didn’t make any mistakes. You could definitely overdrive tonight.”

Pearson felt he simply ran out of time with his Dunn-Benson Racing Black Diamond mount.

“I wish I would’ve moved up a lap or two earlier when Scott was messing around there on the bottom,” said Pearson, who started ninth. “We might could’ve rolled him through the center there. We closed the gap up definitely, but we were just one lap shy.”

The bridesmaid finish vaulted Pearson back into the Lucas Oil Series points lead past Davenport, who faded to ninth in the final rundown after climbing as high as second from the fifth starting spot.

Sheppard, meanwhile, couldn’t quite keep pace with Pearson in the race’s final laps.

“I think I had a pretty good car on the bottom like (Bloomquist and Pearson) did,” said Sheppard, who started eighth. “But during that little bit of a run that we had going there (following the lap-35) I got my tires really hot on top and I think once I moved down behind Earl it was just no good. My tires were just too hot, so I had to move back up and run where I know how to run.”

Jimmy Mars of Menomonie, Wis., quietly raced to a sixth-place finish, ending the race in the same spot he started it. Dennis Erb Jr. of Carpentersville, Ill., slipped from the outside pole to seventh at the finish while Ryan Unzicker of El Paso, Ill., advanced from 20th to place eighth. Davenport and Tri-City regular Billy Laycock of Marine, Ill., who started 26th thanks to a track provisional, rounded out the top 10.

Shannon Babb turned back repeated top-side pressure from Jonathan Davenport to win the opening heat race, which was slowed by a single caution for Kevin Cole. ... Scott Bloomquist raced to a comfortable victory over Steve Francis in the second heat. ... The initial starts were called back in both the second and third heat races. ... Dennis Erb Jr. held off Jimmy Mars to claim the third heat. ... Claiming the final heat, Bobby Pierce became the first non-polesitter to win. Don O'Neal briefly overtook Brandon Sheppard for second, but could not hold the position.