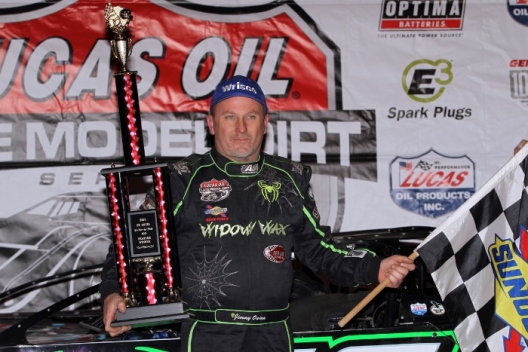 Jeff Hall
Jimmy Owens earned $12,000 for his victory at Macon Speedway.
What won the race: Inheriting the lead when both Bobby Pierce and Billy Moyer suffered flat right-rear tires under a lap-58 caution for Brandon Sheppard, Jimmy Owens of Newport, Tenn., paced the remaining 42 circuits for a $12,000 payday in the St. Louis U-Pic-A-Part 100.
Quotable: "I hate it for them guys. But we had a pretty good car," said Owens. "We was biding our time. Lapped traffic’s always an issue here, so I was just trying to save my tires there to the end. We was able to take it easy and cruise a little bit."
On the move: Consolation race winner Devin Moran of Dresden, Ohio, advanced from 17th to round out the podium; Chris Brown of Spring, Texas, climbed from 20th to finish sixth.
Winner's sponsors: The winning Rowland Racing Club 29 machine has a Cornett Racing Engine with sponsorship from Midwest Sheet Metal, Ohlins Shocks, Red Line Oil, Sunoco Race Fuels and Widow Wax.
Points chase: Following the event, Jonathan Davenport of Blairsville, Ga., has 1,655 points to lead Owens and Earl Pearson Jr. of Jacksonville, Fla., who each have 1,620 points.
Car count: 30
Fast qualifier: Billy Moyer
Time: 10.228 seconds
Polesitter: Billy Moyer
Heat race winners: Billy Moyer, Jimmy Owens, Bobby Pierce, Brandon Sheppard
Consolation race winners: Devin Moran, Jonathan Davenport, Greg Kimmons
Provisional starters: Earl Pearson Jr., Mike Benedum
Next series race: May 1, Tri-City Speedway (Granite City, IL) $10,000
Editor's note: Results and race details are unofficial.
From series and staff reports

MACON, Ill. (April 30) — A trip to the smallest track on the 2015 Lucas Oil Late Model Dirt Series schedule brought an end to the good-natured ribbing Jimmy Owens had been receiving from his new car owner about his absence from victory lane on the national tour.

“He’s been hounding my butt a little bit,” a smiling Owens said of Rowland, who during the off-season bought the equipment Owens had been campaigning for Mike Reece and added the three-time Lucas Oil Series champion to his team. “He said, ‘You can start winning any time now.’”

Owens, 43, did Rowland proud at the high-banked bullring, making the 13th Lucas Oil Series event of 2015 his first triumph of the season. He used a big break — the almost simultaneous flat right-rear tires on the first- and second-place cars driven by Bobby Pierce of Oakwood, Ill., and Billy Moyer of Batesville, Ark. — to assume command during a lap-58 caution period but needed no help to stay in front for the remainder of the distance.

Calmly handling six restarts over the race’s final 42 circuits, Owens rolled to the $12,000 top prize without facing a single serious challenge. He kept a pair of Illinois stars — first Shannon Babb of Moweaqua and later Jason Feger of Bloomington — at arm’s length to register his 53rd career win on the Lucas Oil Series.

Feger, 36, wrestled second place from the 41-year-old Babb on lap 83 and stayed there to the finish, taking the runner-up spot several car lengths behind Owens. Rising 20-year-old Devin Moran of Dresden, Ohio, came on strong during the race’s second half to finish third after starting 17th in his first-ever start at Macon, leaving the 12th-starting Babb to settle for fourth after racing in second for laps 61-82 and Ryan Unzicker of El Paso, Ill., placed fifth after climbing as high as third from the ninth starting spot.

Owens, who started third in his Club 29 Race Car, chased leaders Pierce and Moyers for more than half the distance. He was still in that spot when the feature’s complexion changed dramatically moments after Brandon Sheppard of New Berlin, Ill., slowed with a flat right-rear tire to bring out a caution flag on lap 58.

While Owens never had to outduel Pierce or Moyer, he felt he was ready for a showdown.

“I hate it for them guys, but we had a pretty good car,” said Owens, who entered the evening ranked fourth in the Lucas Oil Series points standings despite his slow start in the checkered-flag department. “We was biding our time. Lapped traffic’s always an issue here, so I was just trying to save my tires there to the end. We was able to take it easy and cruise a little bit and keep the car under us and not worry too much.”

Owens’s only real scare came on lap 65 when he slid a bit too high rounding turns three and four and bounced off the outside wall. His edge was large enough that the miscue didn’t hamper him, however, and he negotiated the treacherous top-side through those corners the rest of the way.

“Well, you wait for a good ‘scotch,’” Owens said of the technique necessary to slide through Macon’s third and fourth turns. “You go in yonder and slide clear up to the wall there and you catch, and then you come on off there.”

Owens was victorious in just his second career Dirt Late Model start at Macon. He showed his ability to tame the tough track in his full-fender debut there last year, advancing from the 24th starting spot to finish fourth.

“We just missed a few things last year,” said Owens, whose only other appearance at Macon was in an open-wheel modified earlier in his career. “We had a flat in our heat, a little bad luck, but was able to come home with a good finish, and this year we got the win.”

Feger, meanwhile, showed no disappointment over falling one position short in the final rundown. After engine problems during hot laps forced him to run his backup Hustler Race Car, a runner-up finish was just the tonic he needed to right an uneven season.

“We’ve been struggling pretty bad this year and haven’t been able to to put together a finish in a feature,” said Feger, who started sixth. “We had a rough night, had to get out the backup car … I had bad luck there, but I had a little good luck in the heat race with J.D. (Jonathan Davenport of Blairsville, Ga.) and (Dennis) Erb (Jr. of Carpentersville, Ill., tangling) and the flat tire deal (in the feature) — there must have been something on the track that took out the top two there.

“But the car felt really good. I felt like we were just as good as anybody. I thought I was better at the beginning and it felt like it went away a little bit towards the end, but the way we’ve been going this year we needed the money so it feels good.”

Moran was arguably the story of the race, making his way forward to earn a podium finish. The son of Dirt Late Model Hall of Famer Donnie Moran might have had the fastest machine in the final laps.

“We struggled early in the night and had to start in the back, but the way this place races, we came up through,” Moran said. “It was just an awesome night. It was so much fun.

“I really wasn’t wanting them last couple cautions,” he added, noting the race’s final slowdowns on laps 95 and 97. “I wanted get in a little bit of lapped traffic. Everybody else was up against the wall and I felt like I could maneuver around a little bit … but a third-place finish from where we started, I’ll take it any day.”

The century grind lasted over an hour and was slowed by eight caution flags in addition to Sheppard’s on lap 58. Terry Babb of Decatur, Ill., drew the first caution with a spin on lap 22. Steve Francis of Ashland, Ky., forced yellows with spins on lap 53 and 80; Pierce slowed on lap 66; Erb spun on lap 84 after contact while racing for sixth with Chris Brown of Spring, Texas; and Jared Landers of Batesville, Ark., brought out three cautions, suffering a flat tire on the lap-58 restart, finding the turn-two wall on lap 95 and tagging the turn-three wall on lap 97.

Notes: A big crowd filled Macon’s grandstands on a clear, cool evening. … Pierce, who won last year’s Lucas Oil Series 100 at Macon, recovered from pits stops on laps 58 and 66 to finish eighth, while Moyer returned to the track after pitting on lap 58 but retired once a caution flag flew on the ensuing restart. … Sheppard battled with Owens for third early in the distance but fell back after his car’s right-side door was damaged significantly when he banged together with Moyer in turn four during the scramble following Terry Babb’s lap-22 spin … The top two drivers in the Lucas Oil Series points standings — Davenport and Earl Pearson Jr. of Jacksonville, Fla. — were never factors in the feature. Davenport struggled to an 11th-place finish after his heat-race scrape with Erb forced him to qualify through a B-Main, and Pearson labored to a 14th-place finish after using a provisional to start the headliner. … The Lucas Oil tour moves to Tri-City Speedway in Granite City, Ill., on Friday for a $10,000-to-win event. DirtonDirt.com will once offer pay-per-view coverage.

Polesitter Billy Moyer overtook fellow front-row stater Kevin Weaver in the closing laps to win the first heat. ... Jimmy Owens led the second heat wire-to-wire, with Eddie Carrier Jr. holding off Don O'Neal for second. ... Making some contact, Bobby Pierce slid past Jonathan Davenport in the first corner early in the third heat and went on unchallenged to victory. ... Davenport was later involved in an incident with Dennis Erb Jr. after the duo battled with Jason Feger for second, drawing a caution. ... Brandon Sheppard topped Jared Landers in a thrilling side-by-side battle to win the final heat, with Shannon Babb also making a late charge. ... Mike Benedum brought out a caution in the final heat after grabbing the turn-one wall.

DirtonDirt.com's pay-per-view coverage from Macon is under way. Click here for more information. ... Billy Moyer of Batesville, Ark., set a new track record during qualifying. ... Macon opens a three-race weekend that continues at Tri-City Speedway in Granite City, Ill., and Paducah (Ky.) International Raceway. ... At a fifth-mile, Macon is among the smallest dirt ovals in the country that regularly hosts Super Late Models. ... Don O'Neal of Martinsville, Ind., was the winner of the most recent series event last Friday at Roaring Knob Motorsports Complex in Markleysburg, Pa.