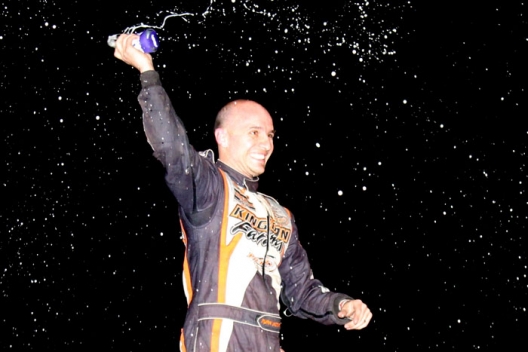 WEST BURLINGTON, Iowa (April 18) — When Iowa native and Hall of Fame driver took the lead from outside front-row starter Ryan Unzicker on the sixth lap Saturday at 34 Raceway, it appeared he would run off and hide from the 24-car field in the Slocum 50.

But Unzicker hung around at the 3/8-mile oval, putting himself in position to pounce when the $10,555’s winner’s purse was on the line. And pounce he did, just in the nick of time.

Swinging into the outside groove on the final lap, Unzicker rolled around Moyer exiting turn four and grabbed the richest victory of his career in a race tri-sanctioned by the MARS DIRTcar Series, Sunoco American Late Model Series and Corn Belt Clash.

“(Moyer) was kind of running the middle there. We reeled him, and then he seen my nose, I believe, and seen me get underneath of him,” said Unzicker, of El Paso, Ill. “He changed his line and kind of cut me off there. I was like, 'Well, hell, I’m either going to finish first or third,' so I just picked the outside and went around.

“I was thinking about it for the last couple of laps, because I knew he seen me. But I wasn’t sure. It looked kind of dirty and dusty out there (in the high groove). What the hell. I just gave her a shot.”

While the fifth-starting Moyer led by more than a half-straightaway most of the way, the Batesville, Ark., driver knew his car wasn’t as fast late in the 50-lap feature that honors late Iowa racer Brent Slocum.

“We were just good at the wrong part of it, I guess,” Moyer said. “At the beginning, through the middle, the whole race there, (until) five laps to go, it just went away on us. The car got tight. He did a good job there. We just let it get away from us a little bit right there at the end.”

Unzicker led from the outset, but Moyer was quickly up from his third-row starting spot and took the lead with an inside move on the sixth lap just before a slowdown for a turn-three tangle between hometown driver Jay Johnson and Hall of Famer Scott Bloomquist of Mooresburg, Tenn., who was coming off a World of Outlaws victory the previous night in Farmer City, Ill.

Moyer pulled away comfortably on the restart with Unzicker finding his hands full with Mark Burgtorf and Tony Jackson Jr. with a mid-pack scrambled sending Garrett Alberson on an infield foray in turns one and two.

Jackson slipped high in turn four to open the door for Burgtorf, who briefly worked past Unzicker on a restart to take the second spot while Moyer was cruising out front before the halfway point.

Chris Simpson and Utter worked their way into the top five and mixed it up with Unzicker, Burgtorf and Justin Reed while Moyer ran unchallenged out front before a lap-26 caution for Mitch McGrath’s turn-two spin.

As the laps wound down, Unzicker finally tracked down Moyer and persistently tried to work under him before making the winning pass.

“It’s just a great night tonight. Last night (at Davenport Speedway) and tonight, we’ve been struggling with the car. Last night we didn’t get to go run the heat race; we had wiring issues. And tonight we fought fuel issues all night, and finally just gambled and changed the carburetor for the feature tonight.

“The car was excellent. We were just a little too tight there at the beginning of the race. I was waiting to see the slick (track conditions) come into play, and with the stagger and setup we had under it, we were just waiting for it to burn off a little bit, and the car came to us.”

Chris Simpson had problems, too, forcing him to ditch his primary ride.

“We got here and felt a vibration in the car, so we ended up checking the pulleys on the front, and something was wrong with the front of the pulleys, so we had to actually unload a brand new car and race it. We struggled a little bit,” Simpson said. “This car is just going to take a little different stuff, but the track was great, the racing was great. You know, a third-place finish against this competition is great."