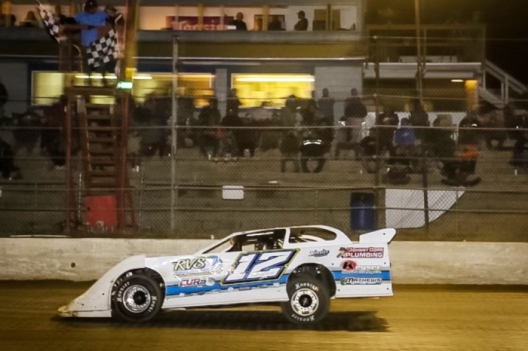 ELLISVILLE, Fla. — In a race that featured many comers and goers on Friday’s night one of the Sunshine State 50 at All-Tech Raceway, Ashton Winger dialed up the intensity when he needed and it culminated in, monetarily speaking, his biggest win of an otherwise rocky season.

The Hampton, Ga., driver came on late to lead the final 13 of 40 laps and snag the $20,000 victory over a respectable 28-car field that featured the likes of Tim McCreadie — Friday’s runner-up — plus Jonathan Davenport and Brandon Overton.

But Winger couldn’t move himself to celebrate stylishly, much less celebrate at all beyond his obligatory smile in victory lane photo ops with the event’s hardware. Contact with McCreadie on a lap-four restart ended up being a deciding factor that helped Winger to victory lane.

While Winger was undeniably fast from the fifth-starting spot, McCreadie had obviously been slowed by his damaged front end and crumpled front-left fender.

“I apologized to him, his crew. I understand if he owes me one. This year’s been weird. I’ve been making some mistakes and driving probably a little harder than I need to. I fell back a little bit and came back through, but I can’t seem to have a race without some drama. Unfortunately that’s my fault. Again, apologies to them and T-Mac. Their car is beat up and I know it’s my fault.”

McCreadie finished 2.182 seconds behind Winger, whose win matched the richest of his career and lone $20,000 triumph July 3, 2020, in a World of Outlaws Case Late Model Series event at Cedar Lake Speedway in New Richmond, Wis.

The reigning two-time Lucas Oil Late Model Dirt Series champion led the opening lap in a race characterized by four leaders but had to claw back through the field from 11th after the run-in with Winger booted him down the running order.

McCreadie, though, went a step further by saying if he fired off better on the lap-four restart that he wouldn’t have slipped into Winger’s clutches.

“Yeah, I made a mistake on the restart and put me back there where I can get used up a little bit,” McCreadie said. “Got used up off of four and luckily we kept it off the wall. I just bent the bumper and then I knocked it down the rest of the way. It’s a shame. This place is like 400-foot wide. It’s amazing you can get near anybody, much less touch them.

“We’ll take it and move on tomorrow. Tomorrow is the big one. I just have to get a little stronger to race with the guys I need to race with.”

Payton Freeman of Commerce, Ga., picked up where he left two weekends ago when he won $22,000 at Alabama’s Deep South Speedway, starting from the pole and leading laps two through four. But issues arose for the 20-year-old on lap four when he jumped the cushion in turns three and four, knocking his steering out of alignment and forcing him to limp home in 13th.

While McCreadie and Freeman labored through early setbacks, All-Tech regular Mark Whitener of Middleburg, Fla., quickly powered to the point from the sixth-starting position and led laps five through 27.

The only problem for Whitener following the race’s final caution on lap 17 is that he mismanaged Friday’s softer tire compound. Right when Winger came to life around the bottom, Whitener had lost serviceability in his tires by simply running a pace that couldn’t be sustained.

“I tried to slow down, but I couldn’t maintain,” said Whitener, who finished fifth. “When I slowed down, it just got worse. I lit them back up and did the best I could.”

Whitener, a Crate regular at All-Tech, typically runs the 1350 right-rear compound on the tricky half-mile. Friday’s Super show, meanwhile, required teams to run a softer compound of 1300. Still, Whitener “wasn’t expecting it to give up like that,” he said when describing his fall from the lead on lap 28 to finishing six seconds behind by the checkered flag.

“I guess I was driving a little too hard. Leading, $20,000 here, at my home track … I was running a little too hard,” said Whitener, who was in position for the richest win aboard a Super Late Model. "Got the tires hot. It gave up on me there at the end. Live and learn. I’m going to pace myself tomorrow night and hopefully I’m up front again. I’ll just pace myself and see if I can lead at the end instead of being in the middle.”