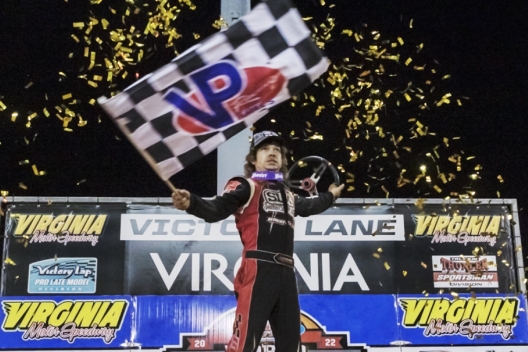 Bare got inside leader Zack Dohm of Cross Lanes, W.Va., and a lapped car on lap 58 to take the lead heading to the white flag en route to his career-richest payday.

Dohm got by Bare on lap 44 to take second and then take the lead from leader Henry Hornsby III on lap 47. Bare followed Dohm into second, turning up the wick and chasing down Dohm late in the 60-lapper. They battled in lapped traffic three-wide on lap 53, with Dohm holding the top spot and then again on lap 58, with Bare finally going ahead.

"The money, this $50,000, will help our racing a whole bunch, but that right there (pointing to the B8 on his car) means more than the money to me,” said the third-generation driver, who followed the tire tracks of his grandfather Tommy and father Booper. “To honor my granddaddy like that really means a lot.”

Benji Hicks and Hornsby led the 27-car field to green with Hicks pulling away early. Kyle Hardy’s 360-degree spin in turns one and two didn’t require a caution, but Hicks got into the rear of a slower car on the 16th lap to spin in turn four, handing the lead to Hornsby.

On the lap-16 restart, third-running Tyler Emory spun to trigger a turn-two wreck.

On the restart, Hornsby pulled away and had control on the 30th lap to collect the Wayne Sawyer Sr. Memorial Victory Lap Halfway Leader Award, collecting $1,000 cash and a plaque.

After the 10-minute pit stop, Hornsby resuming leading with Bare, Justin Williams, Dohm and Hubbard in tow. On lap 37, Hubbard put a slide job on Williams in turn 4 to take third. On lap 45, Dohm got by Bare for second. Two laps later, Dohm overtook Hornsby on the outside for the lead.

On lap 48, Bare got by Hornsby for second and set out to catch Dohm. On lap 53, Dohm and Bare went three wide with a lapped car, with Dohm holding on to the lead. The two raced side by side until lap 58, when they went three-wide, this time with Bare coming out with the lead. Bare outran Dohm to the checkers.