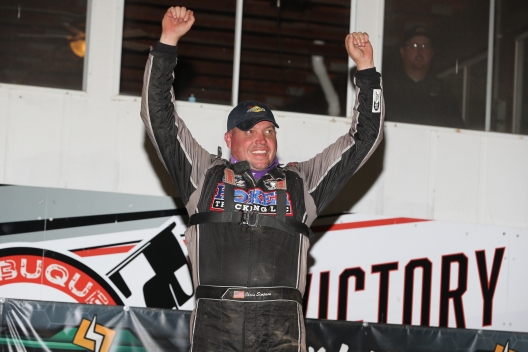 Mike Ruefer
Chris Simpson rejoices in his second career MARS victory Thursday at Dubuque.
What won the race: Chris Simpson of Oxford, Iowa, muscled around polesitter Spencer Diercks on the initial start and staved off a charging Ryan Unzicker to capture Thursday's MARS Super Late Model Racing Series feature at Dubuque (Iowa) Speedway. Simpson led all 40 laps from the outside pole and crossed the checkers 0.610 seconds ahead of Unzicker, who finished second from 17th.
Quotable: “I saw (Unzicker) move up to third, so I knew that bottom had to be good," Simpson said. "He moved me down there. I didn’t feel the best, but I could get a heckuva run off of two, and I knew that’d save me down the backstretch. I have to thank all my sponsors. … I was happy for the caution (with six laps to go). It gave me time to settle down and get in the line I was running. It all worked out. … This is our only race for the weekend, and we’ll take it."
Key notes: Polesitter Spencer Diercks was disqualified for being light at the scales; he'd crossed the line third. ... Chris Simpson, who won on the second race out with a new Longhorn Chassis, now has two career victories with the MARS Racing Series and three on the 2022 season. ... Runner-up Ryan Unzicker started 17th after a flat tire in his heat race. ... Tyler Bruening of Decorah, Iowa, rebounded from a flat tire to finish fifth. The former World of Outlaws regular ran as low as 15th on Thursday. ... Four cautions slowed the feature that spanned a hair under 25 minutes. ... David Webster scratched from the feature. ... The MARS Racing Series, which began its back half of the 2022 season with race No. 9 on its 16-race schedule at Dubuque, heads to Kankakee (Ill.) County Speedway on Friday part of a three-race weekend.
On the move: Ryan Unzicker of El Paso, Ill., started 17th and finished second.
Winner's sponsors: Simpson’s Longhorn Chassis is powered by an Andy Durham Racing Engine and sponsored by Cheap Cars, Five Star Shop Service, Randy Davidson Trucking, Nutrien Ag Solutions, Hoker Trucking, Superior Cleaning, Capital Capsigns, Allgaier Performance, Chase Decals, Simpson Farms, IITI and Lucas Oil.
Points chase: Before Dubuque: 1. Jason Feger (466); 2. Ryan Unzicker (449); 3. McKay Wenger (369); 4. Bob Gardner (315); 5. Tommy Sheppard Jr. (300).
Current weather: Clear, 72°F
Car count: 23
Fast qualifier: McKay Wenger
Time: 14.492 seconds
Polesitter: Spencer Diercks
Heat race winners: Spencer Diercks, Chris Simpson, Tyler Bruening
Next series race: August 20, Lafayette County Speedway (Darlington, WI) $5,000
Editor's note: Corrects finish to reflect apparent third-place finisher Spencer Diercks being disqualified for weighing in light at the scales.