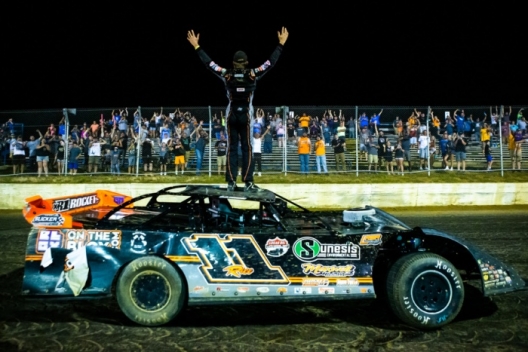 UNION, Ky. — The worst-kept secret in Dirt Late Model racing is that home-track star Josh Rice is the driver to beat at Florence Speedway.

The 23-year-old from Verona, Ky., proved it again Thursday at the half-mile oval in northern Kentucky, overtaking race-long leader Earl Pearson Jr. before the halfway point of the Ralph Latham Memorial and dominating the rest of the 60-lapper for a $15,000 Lucas Oil Late Model Dirt Series victory. It was his second in a row in the 36th version of one of Florence’s biggest events.

"I may not be any good anywhere else,” the ninth-starting Rice said in victory lane, “but they can't say I ain’t bad here.”

Rice, who celebrated with backstretch donuts and a salute of the backside fans, took the checkers 1.689 seconds ahead of pole-starting Ricky Thornton Jr. of Chandler, Ariz., for his second career Lucas Oil Series victory. Tour rookie Garrett Alberson of Las Cruces, N.M., was third — his first podium finish on the national series — while 13th-starting Jason Jameson of Lawrenceburg, Ind., and series points leader Brandon Sheppard of New Berlin, Ill., rounded out the top five.

Jacksonville, Fla.’s Pearson led the first 26 laps from outside the front row but retired just after losing the top spot to Rice when a rock struck his car’s oil filter. He parked during the caution just before halfway.

While Pearson looked strong out front, Rice was quickly working his way forward after starting in the fifth row alongside his older brother James. He broke into the top five on the 13th lap, then began a back-and-forth battle with Thornton after a lap-20 caution as the drivers traded multiple slide jobs and crossover moves behind Pearson. Once Rice cleared Thornton he closed in on Pearson and took a lead he’d never give up three laps before halfway.

"When we fired off there, I really couldn't believe how good I was down here in (turns) three and four. I (ran) that slider line, I think until I took the lead, but it’s just unreal to do it in front of all these fans,” Rice said. "It's gonna be a fun celebration. … this is just awesome, I can't believe we just won this thing two years in a row.”

Rice was glad the race wasn’t any longer after he commanded the second half of the feature.

"When I could cut (turns) three and four, I realized I wasn't really sliding the car. I knew I was saving tires,” he said. “Once I got out front, I was like, 'Oh man, I just got up here really quick. Hopefully I didn't burn my stuff up.’ Like I said, I knew Earl was good. I just knew if I could ever get out in clean air I would be so much better. … Good thing it wasn’t 100 laps. I was getting wore out. I got to where I couldn’t hardly steer, but it's unbelievable.”

Thornton ran in the top three throughout the race but his car’s handling was a little too tight entering the corners, he said.

“Once Josh got by me, I kind of slowed myself down, just trying to save and save. I made a run for there with about 10 (laps) to go and I closed (the margin) by about half of what (lead) he had,” Thornton said. "But he was really good. He's really good here, especially whenever they water the top (groove) like this. Who knows, maybe we'll come back here later in the year and we'll be just as good.”

Alberson, who apologized for his part in a scrape with fourth-running Robby Hensley, who slowed with a flat left-rear tire on the 20th lap, was surprised that Florence was the site of his best-ever Lucas Oil performance.

“It's really crazy because this is one track I had circled on my list the whole year, like this is gonna be a problem because I've never been good here,” he said. "We're definitely a little tight to do anything about Josh. He's flying around here. He's got it all figured out right there. I'm just really excited. This is the first top-three (on the Lucas Oil Series) for this team and for me and it's really cool.”

Notes: Rice lapped all but nine competitors. … Seventeen of 25 starters were running at the finish. … Two cautions slowed the action, the first for Robby Hensley’s lap-20 flat tire and again eight laps later for debris (that’s the caution when Pearson pulled to the infield pits). … Florence's event opened a four-day stretch of racing over the Fourth of July weekend that continues at Portsmouth (Ohio) Raceway Park then Muskingum County Speedway near Zanesville, Ohio.