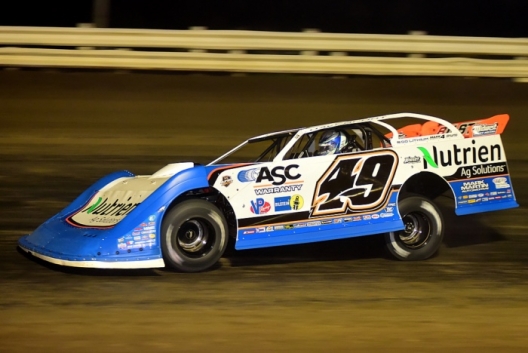 If it paid so good for the rest of us.

The 38-year-old Davenport led all 20 laps from the pole position on the historic half-mile oval for a $20,000 payday on the XR Super Series and will return Tuesday to try and double his money during a sizzling hot week in Kansas.

Battling triple-digit temperatures and one of the nation’s fastest dirt tracks, the top-ranked Davenport ran conservatively to avoid overheating his engine or tires in a race that was cut to 20 from 25 laps because of those concerns.

“Hoosier makes a great tire, but you know that these (cars) are so stuck to the earth and this place is crazy big … pretty much he was just trying to hang on. I maybe went hard two laps, just to you know, try to get a little space from Chris there,” Davenport said. “We showed a (high) water temperature in the heat race when we was really on it. And so we were done a few things. Jason made a good call (to) drill some holes (in the nosepiece) and do some other stuff to get our water temperature down. So that definitely helped, but we was more worried about tires blistering and blowing out right fronts.”

Madden cruised behind the leader much of the race, pulling a bit closer in the late-going but never making a serious bid for the lead.

“We really didn't know what to expect here, so we were trying to be is be safe and, you know, be conservative at the same time and finish tonight and get out of here tonight with a with a finish instead of a crash. We definitely have some tire issues and we'll get to work on that tomorrow, see if we can't get that solved,” said Madden, adding that Belleville reminded him of the former oil-packed clay over near Brunswick, Ga. “We had a great race car tonight, you know, and we was able to get into second every time on the start, but just pulling out and passing someone, that’s not going to happen. But congratulations to J.D. and Chase for third there.”

(Officials announced near midnight that Tuesday's event would be contested on the quarter-mile layout that the Malvern Bank Super Late Model Series competitors had raced on during Monday's program.)

Junghans, who started outside the front row, notched his third podium finish of the season.

“I’ve just gotta get a little bit better coming (turn) two, but hopefully we get these tires figured out, get that stuff cooled down and just work on (the car) a little bit,” he said. “I think we're pretty close. But I'll take running second to the two best cars in the country right now.”

Four cautions slowed the action, none for serious incidents. Yellows dropped for debris (lap two) and then for the slowing TeeJay Janousek (lap six). The third yellow flew when Dusty Leonard pulled up lame with a shredded left-rear tire and Andrew Kosiski slowed on lap 15 for the final slowdown.

Notes: Davenport notched his eighth overall victory of the season. … Davenport drove the Longhorn Chassis that he drove to a $50,000 victory June 4 at West Virginia Motor Speedway. … Eleven drivers completed 20 laps. … Chase Junghans won the second heat when Jimmy Owens got too high in turns three and four heading for the white flag. … Shane Clanton blew a right-front tire and got into the fence exiting turn two during heat action, forcing him pitside to make repairs. … Billy Moyer’s 2007 track record of 16.189 seconds stood in time trials. Jonathan Davenport’s fast time was 16.308 seconds but he was under 16 seconds in heat action. … Modified driver TeeJay Janousek of Hays, Kan., made a Late Model start ahead of planned action this weekend on the Colorado-based High Plains Late Model Series. … Justin Bussell and Brenden Smith scratched after Belleville time trials. … Andrew Kosiski, Charlie McKenna and Tad Pospisil competed both in XRSS action and on the Malvern Bank Super Late Model Series.