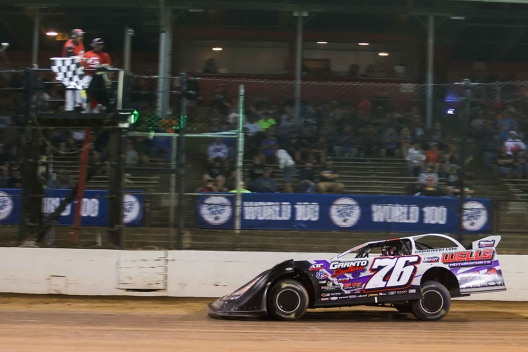 Persistent rain has postponed the remainder of Dream XXVIII to Wednesday, Sept. 7, the same week as the 52nd annual World 100. The event will resume with 14 laps complete and Chris Madden out front. More details will be announced.

Super Late Model rookie Carson Ferguson joined his cousin Chris Ferguson as a heat winner, leading all the way to take the fourth prelim by 1.009 seconds over Brandon Sheppard. The victory gave the 22-year-old Ferguson the third starting for the Dream in his first-ever visit to Eldora. … A lap-11 caution flag in the fourth heat was a great benefit to Gregg Satterlee, who vaulted from sixth to third on the restart and held on to take the final transfer spot. … After a rain delay lasting 28 minutes, the fifth heat began with a wild backstretch tangle triggered when Mason Zeigler hooked a rut in turn two and collected several cars, including Daulton Wilson, Tyler Bruening and John Blankenship. … Jimmy Owens was in a battle for third on lap 12 of the fifth heat when his car veered to the right in turn one and smacked the outside wall. … Taking advantage of a the restart following Owens’s incident, Zack Dohm sailed past Josh Rice to regain the lead he had lost on lap five and held on to emerge victorious and secure the outside pole for the Dream finale. … Rice slipped to a third-place finish behind Zeigler, who survived his opening-lap problems in the marathon race. … Hudson O’Neal’s flag-to-flag victory in the sixth heat gave him the honor of starting the Dream from the pole position, duplicating the spot where he took the green flag in Thursday’s Million. ... Ricky Thornton Jr. and Devin Moran received the points provisionals.

Sprinkles of rain began to fall during the fourth heat and intensified enough after its completion to prevent the fifth prelim from rolling onto the track. The program was put under a rain delay at 5:50 p.m. with the the hope that the small cell of precipitation would pass by quickly without becoming too heavy.

The polesitting Brandon Overton took an up-and-down route to victory in the first heat: falling behind Devin Moran on lap two, regaining command on lap three, slipping to third on lap four and finally rallying to grab the top spot for good from Ashton Winger on lap 11. Overton also survived a mid-race scare when he hit a rut in turn two, causing his car’s left side to bounce off the racing surface. … Moran failed to transfer, finishing fourth after losing a last-lap battle with Shannon Babb. … Michael Page was bidding for a top-five spot on lap 12 of the first heat when he spun entering turn one and collected two other cars, including Trent Ivy. An Eldora Million feature starter on Thursday, Ivey’s car had to be towed off the track. … Chris Ferguson grabbed the lead from Tyler Erb on lap two and controlled the remainder of the second heat, beating Erb by 1.909 seconds with Scott Bloomquist a bit farther behind in third to move on and chase a ninth career Dream triumph. … Million winner Jonathan Davenport was chasing Ferguson from second place on lap 12 when he scraped the outside wall through turns three and four and moments later blew a right-rear tire. He returned after a pit stop and, needing to finish at least 11th to make a B-main field, charged from 14th to finish eighth. … Chris Madden went to work quickly in the third heat, surging from third to first on the opening lap and then running away from the pack to beat Tim McCreadie by 4.828 seconds. The preliminary feature winner secured the fourth starting spot for the 100-lap headliner. … Bobby Pierce advanced from the ninth starting spot to finish third in Heat 3, completing his charge with a lap-12 slider on Chase Junghans rounding turns three and four.