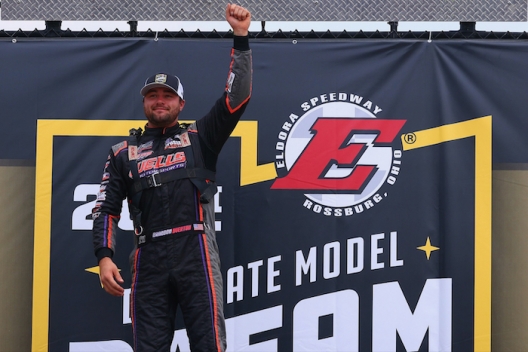 Overton went around Devin Moran on a lap-19 restart and led the rest of the way to set up a bid for his third straight victory in Eldora's Dream, which pays $128,000 to the evening's winner.

"Judging off yesterday and the day before, I better just be trying to make (the Dream feature lineup) you know?," said Overton, who got tangled up in a heat race accident during the Eldora Million. "That's how it goes sometime. We're steadily working. We just had a rough week and nothing's worked out for us, but happy to be back up here" in victory lane.

Overton took the checkers 2.036 seconds ahead of 10th-starting Ricky Thornton Jr. of Chandler, Ariz., while Dresden, Ohio's Moran settled for a third-place finish after leading laps 12-18. Zack Dohm of Cross Lanes, W.Va., was fourth and 11th-starting Michael Page of Douglasville, Ga., rounded out the top five.

Polesitter Kyle Strickler of Mooresville, N.C., who led the first 11 laps and survived a scary moment with Moran at the top of the backstretch when they touched exiting turn two on the 10th lap, ended up sixth.

Overton started fourth and stalked the leaders through mid-race before restarting outside the leading Moran on a restart with six laps remaining.

"I hate it for Devin. You never know what to do and you're leading. (The track surface) was kind of streaking in the bottom a little bit, so he chose the bottom on the restart," Overton said. "I caught the rubber down the stretch and got in that clean air. It is what it is, but we'll take it."

Thornton, who who dropped Moran to third on the 20th lap, couldn't catch Overton but turned in a solid finish for Indiana-based SSI Motorsports.

"We were pretty good. I think I found the rubber (strip) down there in (turns) three and four before a lot of guys.  Actually I found it because of Zack Dohm. He pretty much drove by me and then I was able to get him back through (turns) one and two and moved down," Thornton said. "I was like, 'Oh man, it's really good down here.' Congrats. to Overton on his win. I knew on that last restart, I was hoping I could stay in second. I knew he was gonna get out and kind of drive away, but we'll take second."

Moran, who finished third in Thursday's Eldora Million, finished in the same spot in the Dream prelim.

"I don't think it would've mattered if I would've picked the top or the bottom on the restart," Moran said. "I just could not go on restarts. If it would've stayed green, I think we might have been all right. But it's just the way it is. We've just gotta work on this piece a little bit more and hopefully we can get it a little further up front tonight."

Three cautions slowed the action, including one as the checkers fell for overall fast qualifier Kenny Collins spinning on the backstretch.

Notes: Overton's victory was his first since May 7 in Schaeffer's Spring Nationals competition at East Alabama Motor Speedway in Phenix City. ... Twenty-one of 24 drivers completed 25 laps. ... Josh Rice of Verona, Ky., ran as high as third but slipped back to 11th with spoiler damage. ... Mike Marlar planned to go with his backup car in the remainder of Dream competition but apparently elected to scratch from action because he'd have to start on the rear of a heat race.

(Ed. note) Picking up where Friday’s program left off, consolations got rolling at 2 p.m. Saturday)

Gates will open at noon Saturday with the balance of Friday's card beginnig at 2 p.m. (updated from the original plan to hot lap at 3 p.m.). After the double features are completed, officials hope to make an immediate turnaround into the Dream's scheduled racing that includes six heat races, two B-mains and the 100-lap, $128,000-to-win feature. Eldora officials are targeting an earlier start time than originally scheduled because of an increasing chance of rain.

Rain that began falling as sprinkles during the second heat intensified four laps into Group B’s third prelim, forcing officials to red flag the race at 9:13 p.m. and bring the field into the pit area with Joseph Joiner leading Brandon Overton. The precipitation diminished and the heat race resumed at 10 p.m.

With Mike Marlar cruising alone out front to victory in the first heat, the memorable action came further back in the pack on the final circuit. Chub Frank, the 2004 World 100 champion seeking his first Eldora crown jewel start since the 2015 World 100 and first Dream feature appearance, sustained left-front nose damage when Wil Herrington slid in front of him in turn two in a bid for the fifth and final transfer spot; despite the crunched bodywork, the 60-year-old stayed on the gas, surged ahead of Herrington in turns three and four and nipped Chad Simpson by maybe a foot for fifth place. … Jason Feger exploded a right-rear tire on lap five of the second heat while running sixth. He went on to place 11th after returning to the track. … Devin Moran led from flag-to-flag to capture the second heat, during which some light sprinkles fell but didn’t hamper the action. … Jeep Van Wormer, who finished fifth in Heat 2, is bidding to make his first Dream finale start since a 19th-place finish in 2016.

After Thursday’s marathon Eldora Million doubleheader (the final checkered flag flew at 1:23 a.m.), Eldora Speedway is alive once again for the Dream’s preliminary program. Some dark clouds were visible around the track as hot laps began at 6 p.m. but forecasts indicate showers are trending south of Rossburg until later in the evening; the chance of rain at the track rises above 50 percent around 10 p.m. … A 114-car field is signed in for Friday’s action, down 10 from Thursday’s Million roster. It’s the first time the Dream has drawn more than 100 cars since there were 104 entries in 2010. … Million competitors not running the Dream: Tyler Courtney (the open wheel star had to depart for the start of the All-Star Circuit of Champions Ohio Speedweek), NASCAR Cup Series regular Chase Briscoe, Donny Schatz, Shane Clanton, Colton Flinner, Chase Frohnapfel, Eric Midkiff, Gregg Haskell, Jeremy Shaw and Dustin Smith. … Zebulon, Ga.’s Clanton is still in the pit area assisting his Skyline Motorsports teammate Tyler Bruening of Decorah, Iowa, but he’s withdrawn from Dream action after sustaining a blow to his helmet from an apparent piece of the track on the opening lap of Thursday’s Million feature. He immediately pulled up lame on the backstretch after being stunned by a hit that came with such force that it broke his helmet in two places and caused his right cheek to bleed and swell. Eldora’s medical team checked him over and sent him off with ice packs, but he said he experienced a headache overnight so, fearing he might have suffered a slight concussion, he decided to sit out the remainder of the weekend. … Million winner Jonathan Davenport’s crew chief, Jason Durham, didn’t have much time to celebrate the big-money victory before heading off to bed in the team’s toterhome. He had to stay with the winning car in Eldora’s barn outside turns one and two while DIRTcar officials thoroughly inspected it — a process that didn’t end until roughly 4 a.m. Durham said he was back up by 9:30 a.m. to begin preparing the machine for Dream competition. … Devin Moran’s third-place finish in the Million was his career-best in an Eldora crown jewel and also brought the 27-year-old from Dresden, Ohio, and car owner Tye Twarog a career-high $50,000 payday. … En route to finishes of fourth (preliminary feature) and ninth (Million) on Thursday, Brandon Sheppard of New Berlin, Ill., kept his Rocket Chassis house car crew scrambling. His consistent high-side running had him making contact with the wall so frequently that he returned to the pit area with a crumpled spoiler “almost every time he was on the track,” said team owner Mark Richards, who has multiple pieces of right-rear spoiler ready in case B-Shepp scrapes the concrete on Friday. … One year after sweeping the double Dreams to the tune of $273,000, Brandon Overton of Evans, Ga., failed to crack the Million’s starting field. “God knew better than to give me a million dollars,” Overton cracked with a smile before summing up his forgettable day: “We used up about every part we had (thanks to his involvement in an afternoon heat tangle), we missed the show and my mom (back in Georgia) had to have my dog put to sleep today (due to the 10-year-old canine’s decline from cancer). It’s been a s——- day.” … Chris Simpson of Oxford, Iowa, thought his weekend was over after his car sustained significant damage in Thursday afternoon incident that also involved Overton, but he was back in action for the Million finale program and is entered in the Dream. “The guys decided to fix it,” said Simpson, who noted that virtually all bolt-on components on one side of the car had to be replaced. … Andrew Reaume of Blenheim, Ontario, admitted he was a bit rusty as he absorbed a pair of DNQs on Thursday. It was not only his first competitive action of 2022 but also his first start at Eldora since the 2019 World 100; the Canadian made only one start in 2021, winning a memorial race for his late father at Southern Ontario Motor Speedway in Merlin, Ontario.