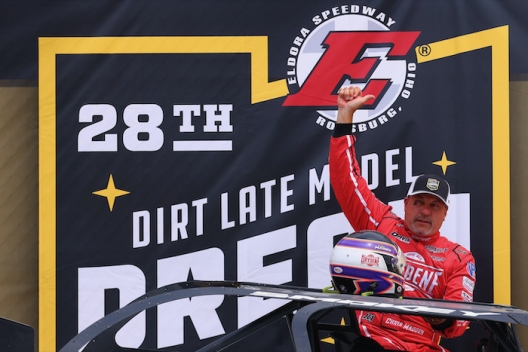 ROSSBURG, Ohio — Chris Madden of Gray Court, S.C., earned a $12,000 victory in Saturday's first Dream XXVIII semifeature at Eldora Speedway, but he had a few worries after initially winning the 25-lapper.

The sixth-starting Madden overtook polesitter and race-long leader Brian Shirley on a lap-17 restart and led the rest of the preliminary for a $12,000 payday, taking the checkers 2.827 ahead of Shirley despite sending engine issues.

"Something went wrong right there to the white-flag lap. We lost a cylinder or something, so we got to get back to the pit and get an engine change or figure out what happened," said Madden, who notched his eighth victory of the year. "But thank you for all the fans coming out fighting us weather. We appreciate you guys. Hopefully we can get this thing in victory lane for the Dream tonight."

The good news for Madden? The crew discovered after the race he'd lost a spark plug wire, an easy fix before the 100-lap program begins.

Tyler Erb of New Waverly, Texas, survived a scrape with Thursday's Eldora Million winner Jonathan Davenport for a third-place finisher after dropping back as far as fifth from his front-row starting spot. Eight-time Dream winner Scott Bloomquist of Mooresburg, Tenn., was fourth and 10th-starting Dale McDowell of Chickamauga, Ga., rounded out the top five.

Blairsville, Ga.'s Davenport started third but never contended up front, pitting on lap 15 with a flat left-front tire forced him out after turn-one contact with Erb.

Shirley raced to a comfortable lead early, but he couldn't hold Madden off on the third of three midrace restarts. He was still pleased to post a solid second-place finish ahead of the evening's $128,000-to-win main event.

"You know, (car owner) Bob (Cullen) just keeps telling me we gotta go race and, you know, eventually the monkey's gonna get off our back," Shirley said. "So it's been a tough year and to hold off Chris who's probably one of the best guys in the counttry, probably him and (Davenport) are probably the best. And to come here at a place we're really not that good, I'm just proud of the effort."

Three cautions slowed the action. The race's first caution appeared on the 10th lap as Daulton Wilson limped his car to the infield pits after getting into the outer concrete wall. The second appeared when Davenport headed to the pits for a lap-15 tire change. The third and final caution appeared on the 16th lap when Bobby Pierce, who changed a right-rear tire on the ensuing caution, slowed and headed pitside again with potentially loose lugnuts on the replaced wheel.

Twenty-two of 24 starters completed 24 laps with Pierce and Wilson the lone retirees.

(Ed. note) Picking up where Friday’s program left off, consolations got rolling at 2 p.m. Saturday.

Gates will open at noon Saturday with the balance of Friday's card beginnig at 2 p.m. (updated from the original plan to hot lap at 3 p.m.). After the double features are completed, officials hope to make an immediate turnaround into the Dream's scheduled racing that includes six heat races, two B-mains and the 100-lap, $128,000-to-win feature. Eldora officials are targeting an earlier start time than originally scheduled because of an increasing chance of rain.

Scott Bloomquist made amends for a poor qualifying run with a spectacular burst forward from the 12th starting spot to finish second in the first heat. He reached the runner-up spot halfway through the 12-lap race and over the final circuits sliced his deficit to winner Chris Ferguson from over 5 seconds to 1.245 seconds. … Heat 1 polesitter Gregg Satterlee found himself squeezed between two cars at the initial green flag and slid sideways in turn one, dropping him to 14th in the 15-car race. He managed to regain only two spots over the remaining distance to finish a disappointing 12th. … Brian Shirley vaulted from Heat 2’s sixth starting spot to the lead in seven laps, taking command with a slick inside move past Kent Robinson on the backstretch and marching on to victory. … Robinson’s solid run came to an end on lap 11 when he stopped on the backstretch with mechanical trouble. … Tyler Erb dominated the third heat to take the checkered flag by 3.083 seconds over Chris Madden, who slipped past Nick Hoffman on the final lap to finish second. … Million winner Jonathan Davenport continued his bid for a perfect weekend, leading all the way to claim the fourth heat by 2.914 seconds over Jimmy Owens.

After Thursday’s marathon Eldora Million doubleheader (the final checkered flag flew at 1:23 a.m.), Eldora Speedway is alive once again for the Dream’s preliminary program. Some dark clouds were visible around the track as hot laps began at 6 p.m. but forecasts indicate showers are trending south of Rossburg until later in the evening; the chance of rain at the track rises above 50 percent around 10 p.m. … A 114-car field is signed in for Friday’s action, down 10 from Thursday’s Million roster. It’s the first time the Dream has drawn more than 100 cars since there were 104 entries in 2010. … Million competitors not running the Dream: Tyler Courtney (the open wheel star had to depart for the start of the All-Star Circuit of Champions Ohio Speedweek), NASCAR Cup Series regular Chase Briscoe, Donny Schatz, Shane Clanton, Colton Flinner, Chase Frohnapfel, Eric Midkiff, Gregg Haskell, Jeremy Shaw and Dustin Smith. … Zebulon, Ga.’s Clanton is still in the pit area assisting his Skyline Motorsports teammate Tyler Bruening of Decorah, Iowa, but he’s withdrawn from Dream action after sustaining a blow to his helmet from an apparent piece of the track on the opening lap of Thursday’s Million feature. He immediately pulled up lame on the backstretch after being stunned by a hit that came with such force that it broke his helmet in two places and caused his right cheek to bleed and swell. Eldora’s medical team checked him over and sent him off with ice packs, but he said he experienced a headache overnight so, fearing he might have suffered a slight concussion, he decided to sit out the remainder of the weekend. … Million winner Jonathan Davenport’s crew chief, Jason Durham, didn’t have much time to celebrate the big-money victory before heading off to bed in the team’s toterhome. He had to stay with the winning car in Eldora’s barn outside turns one and two while DIRTcar officials thoroughly inspected it — a process that didn’t end until roughly 4 a.m. Durham said he was back up by 9:30 a.m. to begin preparing the machine for Dream competition. … Devin Moran’s third-place finish in the Million was his career-best in an Eldora crown jewel and also brought the 27-year-old from Dresden, Ohio, and car owner Tye Twarog a career-high $50,000 payday. … En route to finishes of fourth (preliminary feature) and ninth (Million) on Thursday, Brandon Sheppard of New Berlin, Ill., kept his Rocket Chassis house car crew scrambling. His consistent high-side running had him making contact with the wall so frequently that he returned to the pit area with a crumpled spoiler “almost every time he was on the track,” said team owner Mark Richards, who has multiple pieces of right-rear spoiler ready in case B-Shepp scrapes the concrete on Friday. … One year after sweeping the double Dreams to the tune of $273,000, Brandon Overton of Evans, Ga., failed to crack the Million’s starting field. “God knew better than to give me a million dollars,” Overton cracked with a smile before summing up his forgettable day: “We used up about every part we had (thanks to his involvement in an afternoon heat tangle), we missed the show and my mom (back in Georgia) had to have my dog put to sleep today (due to the 10-year-old canine’s decline from cancer). It’s been a s----- day.” … Chris Simpson of Oxford, Iowa, thought his weekend was over after his car sustained significant damage in Thursday afternoon incident that also involved Overton, but he was back in action for the Million finale program and is entered in the Dream. “The guys decided to fix it,” said Simpson, who noted that virtually all bolt-on components on one side of the car had to be replaced. … Andrew Reaume of Blenheim, Ontario, admitted he was a bit rusty as he absorbed a pair of DNQs on Thursday. It was not only his first competitive action of 2022 but also his first start at Eldora since the 2019 World 100; the Canadian made only one start in 2021, winning a memorial race for his late father at Southern Ontario Motor Speedway in Merlin, Ontario.