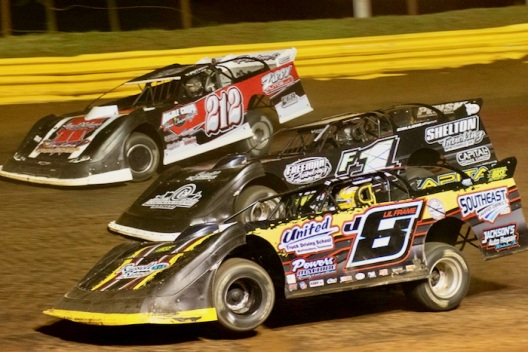 Connie Putnam/photobyconnie.com
Winner Josh Putnam (212) fights off Payton Freeman (F1) and Jadon Frame (J8) at Duck River.
What won the race: Outside front-row starter Josh Putnam of Florence, Ala., led all 40 laps Sunday at Duck River Raceway Park to capture the Schaeffer's Spring Nationals finale and $5,053. Putnam, who celebrated with infield donuts, turned back a midrace challenge from Jadon Frame and took the checkers 0.799 of a second ahead of Payton Freeman.
Quotable: “I’m going get choked up here, because these guys have worked so hard right here," Putnam said in victory lane. "These guys have worked so hard to give me this stuff to race with … This (car) is getting better and better. We made a little trip up to Illinois two weeks ago and Mark (Richards of Rocket Chassis) helped us a little bit on this car and we learned a few things. This baby is a work in progress and I think every week, the more we race, the better we can get."
Key notes: Putnam also won Saturday at Thunderhill Raceway Park in Summertown, Tenn., grabbing a $5,000 XR Southern All Star victory. ... The low-running Jadon Frame came alive before halfway and peeked under the leading Putnam and second-running Payton Freeman for a brief three-wide battle exiting turn two. ... Putnam was able to pull away from his pursuers in the second half of the race. ... Heavy traffic in the final 10 laps allowed Freeman to close back in on the leader, but Putnam was able to maneuver among the slower cars. ... The race's lone caution appeared on the 34th lap for a slowing Kenny Collins. Putnam used the clear racetrack to complete his victory. ... A dozen drivers completed 40 laps.
Winner's sponsors: Putnam’s Jeff Greer-owned Rocket Chassis has a Jay Dickens Racing Engine and sponsorship from Zippy Auto’s Sales, Randle Chupp Race Consulting, 441 Race Wraps, Gabe’s Tire and Towing, Southern Off-Road Surgeons, North Alabama Ink and Silver Creek Sales.
Points chase: Final 2022 points: 1. Carson Ferguson (1,868): 2. Payton Freeman (1,834); 3. Cla Knight (1,438); 4. Jensen Ford (1,060); 5. Joe Denby (1,060).
Car count: 20
Fast qualifier: Josh Putnam
Time: 13.116 seconds
Polesitter: Payton Freeman
Editor's note: Corrects finish throughout.