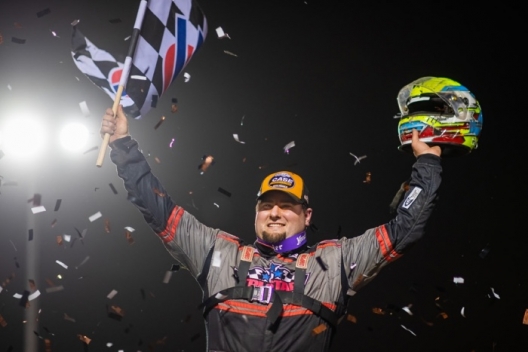 HARTFORD, Ohio — Among Ryan Gustin’s list of near-miss tracks on the World of Outlaws Case Late Model Series the last two seasons was Sharon Speedway. A runner-up to Kyle Larson last year at the 3/8-mile oval, Gustin was anxious for another crack at it.

With his car coming to life just past halfway, the 31-year-old Marshalltown, Iowa, driver went from fourth to second on the 36th lap, then tracked down leader Shane Clanton of Zebulon, Ga., with the winning pass on lap 49 to grab his first career WoO victory.

Gustin, who took the checkers 2.164 seconds ahead of Clanton, earned $20,000 in etching his name on the national tour’s win list.

“It was was elbows up, man,” Gustin said of his winning charge. “I knew it was win it or wear it time.”

The 2015 series champion Clanton, looking for his first tour victory since 2019 after recently rejoining the tour, settled for a runner-up finish after leading laps 21 and 25-48 while Josh Richards of Shinnston, W.Va., tallied is fourth third-place finish in his last five series starts.

Series points leader Dennis Erb Jr. of Carpentersville, Ill., was fourth and Devin Moran of Dresden, Ohio fifth. Poles-starting Max Blair of Centerville, Pa., led 23 of the first 24 laps but slipped back to a seventh-place finish.

Blair led in the early laps and was saved from being overtaken by Richards when a lap-seven caution erased a turn-three pass. Blair remained in control until Clanton turned up the wick, taking the point on lap 21 with Blair answering the move to regain the lead. But four laps later, Clanton took over again and stretched out to a comfortable lead.

Gustin, running fourth at halfway, got rolling and overtook Richard and Blair with 24 laps remaining and set his sites on Clanton, who led a nearly three-second margin. A caution erased Clanton’s lead and Gustin fought his way past Clanton with 12 laps remaining and led the rest of the 60-lapper.

“It just felt like I was a little bit straighter there toward the the first 30 (laps) of it. And the last 30 is probably the most sideways,” Gustin said his alter-ego performance. "Yeah, just watching the board up there. The laps click down. It got to halfway it was time to give ‘er hell and that's what we did. And just hat’s off to everybody. Man. I can't thank everybody on this car enough.”

After last year’s runner-up finish at Sharon, Gustin was glad to improve one spot in 2022.,

“I knew that we'd have a good shot coming back here,” he said. “We were really good here last year. So I knew that if we had a good shot anywhere, it was gonna be here at the Sharon Speedway. This place don't disappoint. It’s one racy joint. Hopefully they keep having us.”

“Well, it got a little rough down in (turns) three and four right in the middle and the cross-member started hitting the ground. I was having to bend (the car) too much, and it started hurting the tires,” Clanton said. “Then I seen Ryan was getting closer — my guy was telling me he was getting closer — and I needed to just hold on there through three and four and there wasn’t much I could do.”

Noting that Gustin’s “been fast a lot of times and it just slipped away from him,” he congratulated Gustin on the victory. But he was also glad for his second runner-up finish in his last three WoO starts. “We just gotta keep (getting) these top-fives here and get those podium finishes.”

Richards nearly took command early over Blair, but he admitted “the cream rose to the top. Ryan and Shane definitely had better cars they could turn into the corner a lot better than we could.”

Thanking car owner and fellow WoO driver Boom Briggs, he said the team is “still working. I’m not super-happy with the car, but we have speed, so that's good. So we just gotta keep tweaking on it and and try to get few spots better.”

The 60-lapper was slowed by two cautions, neither for serious incidents.

The first appeared on the eighth lap when Michael Norris of Sarver, Pa., caught an infield tire barrier and damaged the nosepiece of his Big Frog Motorsports entry (Norris was subbing for the team’s regular driver Mark Whitener, who was competing in his home state of Florida).

The second and final yellow appeared on the 39th lap when Colton Flinner took a spin inside turn two; Flinner retired.

Notes: Gustin notched his second overall victory of 2022; he won in non-touring DIRTcar competition during Georgia-Florida Speedweeks at Volusia Speedway Park in Barberville, Fla. … Sharon hasn’t had a repeat WoO winner in 10 series events. … Series rookie Kyle Hammer limped his car to the infield on the 20th lap.