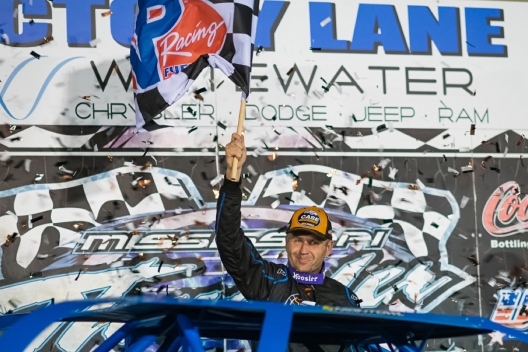 The veteran of Winfield, Tenn., led the opening 18 laps of the Dairyland Showdown finale sanctioned by the World of Outlaws Case Late Model Series, but backpedaled to third, more than two seconds behind Tyler Bruening, with 20 circuits remaining.

“I was bummed because I felt like I should win; I felt like I was the fastest car,” Marlar said. “I just messed up and got passed in traffic.”

But Marlar’s fortune suddenly changed when Bruening crashed from the lead in misjudging a pass of a slower car.

What appeared as Bruening polishing off the biggest Late Model win of his career resulted in a $50,000 victory for Marlar, who led the final seven of 75 laps for his fourth and most sympathy-drawing win of the season.

“I’m bummed for (Bruening). He’s been searching for that big win,” Marlar said. “They, (Bruening and Skyline Motorsports), deserve to win a big race. I’m a little bummed that they didn’t get that, but it fell back in my lap and we have to take them anyway we can get them.”

Considering Bruening grew up 90 minutes from the 3/8-mile near Decorah, Iowa, coupled with the fact he was in storybook position for his maiden World of Outlaws win made Saturday’s turn of events all that more astonishing.

Bruening started fifth and saved his stuff for when the bottom groove would take precedence. Eventual runner-up Tyler Erb led a race-high 37 laps, but his gung-ho approach around the top proved too hard on equipment and that didn’t set himself up well for the finish.

A lap-45 caution for Bobby Pierce allowed Bruening to squeeze past Marlar on the restart and take aim at Erb, who from laps 48-55 couldn’t escape Bruening’s clutches. For eight laps, Bruening either stuck a nose inside of Erb or pulled door-to-door entirely.

“When I was closing in on Tyler (Erb) there, that caution came out,” Marlar said. “The other Tyler (Bruening) passed us both, and he was really good. … That caution came out and I knew then it was going to be a whole different race.”

Bruening caught the tail of the field with nine laps remaining and seemed content with simply riding around the bottom where the majority of competitors migrated. But entering turn one with seven laps left, Bruening pummeled into Lane Lane Mathees and the two crashed up the banking as Marlar and Erb leisurely drove by.

Marlar took care of the rest from there, as Erb couldn’t regather himself for his third win of the year.

“We’d get a long green flag (run) and I’d finally get clear and get my wits about me,” Erb said. “I saw Bruening underneath me and I thought he was making more time down here (in turns one and two) and then he got me on the bottom of turns three and four with how rubbered it was. Our car was really good; two good nights here. Nothing to hang our head about.”

One feelgood and refreshing story of the night was Josh Richards, who finished third from the 21st-starting position.

It was the first podium run for the four-time World of Outlaws champion since last November.

Notes: Brandon Sheppard of New Berlin, Ill., won the fourth and final heat race driving a Rocket Chassis fielded by Boom Briggs, but he had a top-five spoiled on lap 34 because of a left-front tire that was apparently cut in an opening-lap scrape with Tyler Erb and eventually went soft under the first caution period of the race. … Jonathan Davenport of Blairsville, Ga., also had a top-five ruined on lap 34 by a flat left-rear tire that was cut moments earlier from contact with the lapped Brent Larson of Lake Elmo, Minn., who spun between turns three and four to bring out a caution flag. … Boom Briggs of Bear Lake, Pa., broke a reared and driveshaft in the first heat race and was unable to finish; he used an emergency provisional to start the feature. … Jimmy Mars of Menomonie, Wis., smacked the turn-one wall during time trials and scratched from further action. Blair Nothdurft of Renner, S.D., also scratched after time trials.