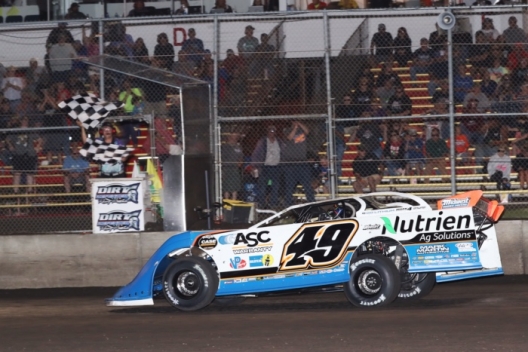 BOONE, Iowa — Plenty of folks dread Mondays as they drag back to work after a relaxing weekend. Jonathan Davenport? Not so much.

For the 38-year-old Blairsville, Ga., driver in 2022, Mondays have been enjoyable and profitable, and Davenport continued that trend at Boone Speedway’s Hawkeye 50 on the World of Outlaws Case Late Model Series circuit by leading all but two laps for his 13th career victory on the national tour.

For the third time in his 12 victories this season, Davenport pocketed a $20,000 on a Monday evening event, adding Boone’s windfall to victories in XR Super Series action on June 13 at the Belleville (Kan.) High Banks and July 11 at Stuart (Iowa) International Speedway.

The Boone victory also marked Davenport’s fourth in his last seven starts and came just 24 hours after his $53,000 payday on the Lucas Oil Late Model Dirt Series in the Imperial Tile Silver Dollar Nationals at I-80 Speedway in Greenwood, Neb.

“We're definitely walking tall here lately, for sure,” the Double L Motorsports driver said in Boone’s victory lane. “This is a different car than we won with last night, so that means we've got plenty in the stable that's really good.”

Davenport, who took the lead on the third lap when he drove past bobbling polesitter Tyler Bruening of Decorah, Iowa, stayed safely ahead of charging WoO points leader Dennis Erb Jr. after a restart with 10 laps remaining to secure his third WoO victory of the season.

Carpentersville, Ill.’s Erb, who started eighth, finished 1.478 seconds behind at the finish with Mike Marlar of Winfield, Tenn., in third to extend a streak of 17 consecutive top-five feature finishes. Bruening was fourth and 10th-starting Bobby Pierce of Oakwood, Ill., rounded out the top five on the quarter-mile oval that’s best known for hosting modified racing’s IMCA Speedway Motors Super Nationals.

Starting outside the second row, Davenport edged past Marlar to take the second spot on the first lap, then two laps later pounced when Bruening briefly slipped up in turn two.

“We got lucky early,” Davenport said. “Really, I felt a little bit in the crumbs (on the track surface) there was a little bit more grip, so we got to the top and got a run on Mikey (Marlar) and got by him. And then Tyler went in there and about looped it, because it got slick like (in) one lap. He about looped it there, and we just happened to go to the bottom and got by him, luckily, so everything just worked out for us.”

From then on Davenport stayed ahead of a feisty battle for the second spot with Marlar and Bruening frequently exchanging the position with Erb, Devin Moran and home-state driver Ryan Gustin also in the mix. Davenport cruised out front without a challenge, building a lead of more than two seconds by halfway as he feather-footed around the black-dirt track.

“The track was really, really slow. And this is the biggest, baddest motor Clements Automotive has ever built, so that thing’s one smooth rig,” Davenport said. “I really wish they would have worked the racetrack a little bit. I think we'd have a little bit better race, but you know, I don't know this place and I have hard enough trying to make decisions on my own car, so I'm sure they did what they thought was best.”

Erb reached the second spot on lap 36 and began cutting into Davenport's lead, drawing within a second when the slowing Boom Briggs brought out a caution that gave Davenport a restart and clear racetrack for the final 10 laps.

“The car started to get a little better, you know. I always like it when (the surface) starts to clean up and get a little slicker there. The racetrack was in good condition tonight and were able to move around. We snuck up there on the bottom there at the end. We didn’t want to see that caution there, but like I said, we had a good run here,” Erb said. “We just needed to be a little bit better. I think (if) we could've charge the corner a little bit harder and stuck a little better, I think we would have been all right. But you know, Jonathan was also, you know, he was awful good tonight, so to start of eighth and get up there to second, we're happy with that.”

Marlar was never outside the top four, but the 2018 series champion never felt like he had a car to seriously contend for the victory despite yet another top-five finish.

"I just honestly didn't feel good really all night long,” he said. “I made a good lap qualifying and got out front in that heat race and I was just kind of hanging on there. I couldn't run on bottom. Really, you needed to drop the bottom or the middle, and I was having to run that outside that's pretty edgy out there. Just glad the race is over and we got third.”

Bruening, last year’s WoO Rookie of the Year who is looking for his first victory on the national tour, couldn’t hang his head.

"I guess you should be feeling pretty darn good about yourself if you're disappointed with a fourth with the field of cars we’re racing against night in and night out,” he said. "I didn't need either one of those restarts, really. I was in a rhythm I was hitting my marks I was really running J.D. back down after I got back by Mike. I didn't need that restart and I didn't need that late caution, either. I knew that Mikey was going to get up there and try that top and maybe just got a little conservative, just protecting the bottom and he got back by us.”

Besides the caution for Briggs, the only other slowdown came on the third lap when Brian Shirley spun; he recovered to finish 15th.