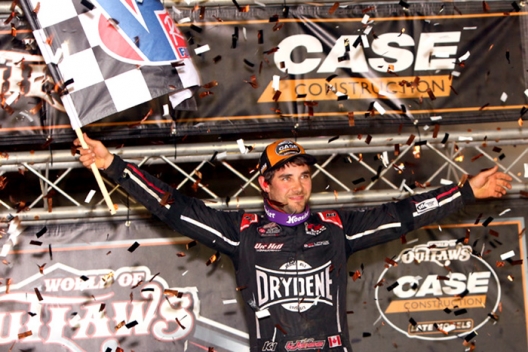 BRISTOL, Tenn. — Bristol Motor Speedway has only hosted dirt races for two straight years now, but it seems like Ricky Weiss has tried conquering The Last Great Colosseum for much longer.

In the half-mile’s return last year, Weiss squandered the win in a race he led 31 laps. Earlier this year in four XR Super Series races at the NASCAR facility, he set fast time on three occasions but faded during in-race competition. On Friday, Weiss led 20 laps only to lose to Jonathan Davenport.

The 33-year-old once again pulled all the right levers from the outset of Saturday’s World of Outlaws Case Construction Late Model Series Bristol Bash finale — and this time he left no doubt.

Weiss overcame lingering letdown and an early charge from Chris Madden for an ultra-satisfying $25,000 win in which he led 29 of 30 laps. Jonathan Davenport crossed the finish second, 2.438 seconds behind.

“Oh, it’s just awesome,” said Weiss, who picked up his third World of Outlaws Late Model Series win in the process. “We were so close. We gave away a couple. I almost gave it away tonight. I could see I had a pretty good lead, then (Madden) was closing the gap.”

Madden, DirtonDirt.com’s top ranked driver, started from the fourth position instead of sixth since original fourth-starting Scott Bloomquist opted to not take the green flag because of a burnt piston.

Weiss enjoyed the early benefits of clean air, mounting a 1.8-second by lap five. In the meantime, Madden had breezed past Kyle Hammer and Davenport to lock in on Weiss in second.

On lap 11, Madden officially erased the gap and needed just one slide job through turns three and four to lead lap 12. At that point, the Bristol Dirt Nationals champion appeared poised to dispatch the back half of the field as promptly as he caught Weiss, but not quite.

Weiss regathered himself on lap 13 and found traction on the bottom groove while Madden drifted up the pronounced banking. That marked the last side-by-side battle for the lead, as Weiss hustled back around Madden to lead lap 14 and thereafter.

“Madden got by me there, and I was thinking, ‘Oh, he must be really good,’ because he started sixth,” Weiss said. “He passed me on the bottom there, then he moved up half a lane and typically I would have just followed him there. I think we were able to turn a little bit more and he showed me the fast lane.”

Madden, meanwhile, knew he didn’t close the door fast enough once completing the pass for the lead on lap 12.

“When I got by Ricky there, I guess I left too much racetrack open,” said Madden, who instead finished third. “We were behind those lapped cars at that time. I just didn’t get down to where I needed to be and clear those guys. Ricky got his nose back to me, and I try to race people the way I want to be raced. I left him a lane down there and he took the lead back. Got behind some of the lapped cars and then (Davenport) got by me there. A great racetrack tonight.”

Weiss was never touched over the final 17 laps, but felt pressure from Madden and Davenport not far behind as his lead shrunk from two seconds to a half second between laps 23 and 25 through traffic.

“There were nerves, there definitely was,” said Weiss, who never once faltered.

Davenport, on the other hand, concludes a six-figure week with another run inside the top-two. Last Saturday, the Blairsville, Ga., racer opened the floodgates with a big $50,000 win at Florida’s All-Tech Raceway.

That set the table for an additional runner-up finish Tuesday at Ohio’s Eldora Speedway, plus wins Wednesday at Brownstown (Ind.) Speedway and Friday at Bristol.

“My car got better as the race went (on),” Davenport said. “I fired off there and didn’t get a good start. I fell back to fourth and was in so much dirty air. Once about halfway through, the car came to me. I was just really loose to begin with. Then we got better and better. I was trying to move my line around a little bit; tried the top, the middle, the bottom. Finally I found when I could cross from the top to the bottom in turns one and two. I hadn’t been able to do that, but I saw that’s where I could gain speed at.

“Ricky did a good job. He deserves one of these. He’s led three or four of these things here, so congratulations to him. It was not a bad night for us, coming home with another top-two. It’s definitely great for our Longhorn car. … It’s been awesome and I hope they keep putting dirt on this place.”

Saturday’s finale of the Bristol Bash comes on a partly cloudy day that saw afternoon highs reach the high 70s. There’s just a slight chance of rain in the forecast. … The car count numbers 21, down one from Friday’s entry list. Withdrawing from competition are Illinois drivers Tim Lance and Don Hammer while Vic Hill of Mosheim, Tenn., has joined the field. … Coming of his electrifying run to the doorstep of victory after being penalized to the rear of Friday’s feature field for reporting late to the staging area, Kyle Larson of Elk Mound, Calif., is back pulling double duty in the Late Model and WoO Sprint Car classes. He flew to Dover, Del., following Friday’s program for Saturday afternoon’s NASCAR Cup Series qualifying and then hopped back in a plane to return to Tennessee. … With Saturday’s 30-lap Late Model running after the WoO Sprint Car A-main, Friday feature winner Jonathan Davenport of Blairsville, Ga., is expecting the Bristol surface to be even racier. “(The sprints) move the groove all the way to the wall,” he said. “That just gives us Late Models more of a corner entrance where it’s wide, because we knock such a big hole in the air that we have to get out of the car in front of us’s wake to be able to make any speed.” … WoO rookie Kyle Hammer of Clinton, Ill., led the first six laps of Friday’s feature off the pole but faded to a seventh-place finish. “We just need a little more right-rear stick,” the 22-year-old said. “I felt good the first couple laps, and, I don’t know, towards the middle there I just felt like I had no right-rear underneath of me. It definitely wasn’t the finish we wanted by any means, but to be able to come out of here with a top 10 the first night (plus a $1,000 bonus for being the highest-finishing WoO regular) and have a good notebook for the second night definitely helps.” … Kyle Bronson of Brandon, Fla., was very pleased with his third-place finish in Friday’s feature. He rebounded well after experiencing a rough outing three days earlier in the Castrol FloRacing Night in America event at Eldora Speedway in Rossburg, Ohio. Bronson said his new XR1 Rocket car “was extremely fast at Eldora, and that was kind of our conditions (fast and choppy) there. I’d have liked to been able to race (winner) Kyle (Larson) in that kind of stuff, but we hurt a motor early and then went back out and was leading the B-main and an MSD box went out in my other car, so nothing but bad luck here lately. Maybe (Friday is) a sign we’re turning it around..” … Scott Bloomquist of Mooresburg, Tenn., continued his strong performances at Bristol this season with his fourth-place run in Friday’s headliner. His four recent starts in XR Super Series action at Bristol included finishes of second, fourth and sixth. ... Ricky Weiss's lap of 15.193 seconds in Saturday's qualifying session made him the fast-timer for the fifth time in sixth Super Late Model events this season at Bristol, including the recent XR-sanctioned programs. ... Kyle Strickler of Mooresville, N.C., didn't complete a qualifying lap due to a broken rearend. He switched to his second car for the remainder of the night.