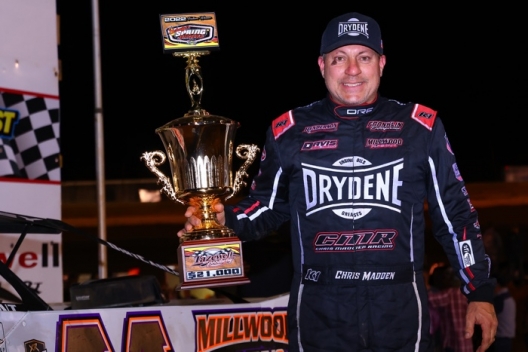 For Chris Madden this spring, it’s a formula for spectacular success.

Two weeks after earning a whopping $227,900 for winning twice and topping the four-race Karl Kustoms Bristol Dirt Nationals points, the 46-year-old star from Gray Court, S.C., was back in the Volunteer State on Saturday night and added a $21,000 triumph in the second annual 75-lap Lil’ Bill Corum Memorial at Tazewell Speedway.

Tazewell’s third-mile size might be considerably smaller than the half-mile Bristol Motor Speedway where Madden broke the bank on March 25-26 and April 1-2, but its similarly steep banks and red clay had him feeling right at home again. He bolted off the outside pole to lead the entire distance of the event that was co-sanctioned by the Schaeffer’s Spring Nationals and Valvoline Iron-Man Series.

The only driver who offered Madden a serious challenge was Ricky Weiss of Headingley, Manitoba, who drew close in the final circuits but had his bid stymied by a lap-72 caution flag that left the Canadian a runner-up, 0.885 of a second behind the red-hot winner.

Dale McDowell of Chickamauga, Ga. — like Madden a $50,000 winner during the Bristol Dirt Nationals — finished third after inheriting the position when Brandon Overton of Evans, Ga., slowed with a flat tire to trigger the race’s final caution flag three laps from the finish. Scott Bloomquist of Mooresburg, Tenn., advanced from the 10th starting spot to place fourth and 12th-starter Dakotah Knuckles of Ewing, Va., completed the top five.

The ever-confident Madden flashed a broad smile in victory lane following his fifth victory of the season — all coming in his last 10 starts — and threw some shade on any critics who might be doubting how he has his Durham-powered XR1 Rocket car running so strong.

“I’ve got a great team right now. I’ve got a great bunch of guys with me,” Madden said of his operation boasting primary backing from sponsors Franklin Enterprises, Henderson Amusement, Millwood Plumbing and Drydene. “We’re just doing what we need to do, and them guys at home can keep making their accusations that they keep making and we’ll keep winning races.”

Madden went to work quickly in Tazewell’s 75-lapper, outgunning the polesitting Overton to assume command on the opening lap. He knew grabbing the point is always important at The Taz, a bullring where races are frenetic affairs.

“Obviously you drive and you run the race completely different if you’re in the lead than you do chasing somebody,” Madden said, though he also noted that “if we get into lapped traffic and it stays green, a lot of times running second at a place like this is easier than leading.”

There were points in the feature when Madden found himself in precarious positions. Heavy lapped traffic forced him to sit up in his seat to keep first Overton, and later Weiss, at bay.

“When I would catch ‘em single-file it wasn’t too bad, but when I caught ‘em double-file right there early in the race, when those guys were racing each other pretty hard, I mean, it’s tough when it’s like that,” Madden related. “Really, you’re a sitting duck if you choose the wrong line and you get stacked up behind the wrong car. A guy gets beside you and he can get by you.

“But we were able to manage it well tonight, and we had a few cautions that fell when they needed to fall. This place is fast and it’s racy, but it’s narrow too. Two cars (abreast) is about max. I did make three cars one time down here — we were three-wide — but that’s what I had to do to not put myself in a position to make the wrong choice.”

Madden’s biggest challenge came with five laps remaining when Weiss, 33, ducked underneath the pacesetter in turn two. The Canadian, who wrestled control of second from Overton on lap 45, had turned up the wick to make a last-ditch run at the winner’s check but couldn’t complete a pass before the lap-72 caution cleared the deck for Madden to cruise unimpeded to the checkered flag.

“I seen him down there,” Madden said of Weiss’s late threat. “He was making some hard charges on entrance there, and I just made sure I left the corner the way I needed to leave the corner to keep the lead. At that time we were in lapped traffic and it had slowed my pace up, and he had a little different tire  combination that I did so he was able to get down in that mud ring and run that bottom a little bit.

Weiss, who started fourth, initially grabbed second from Overton on a lap-14 restart but ceded it back to the Georgian following another restart on the 28th circuit. He needed another 17 laps before he was able to pass Overton for the runner-up spot.

“I got by Overton (early) and he kind of bumped me out of the way a little bit and I was really gritting my teeth at that point,” Weiss said. “I kind of got time to return the favor there a little bit (on lap 45).

“I think I really would’ve had a shot with Chris there if it would’ve stayed green (to the finish). With the lapped cars I think we were just a tad bit better. His crew guy, Ricky (Arnold) there, was trying to get him to go down in one and two. I just don’t think he was able to.”

“We did a little bit different package Shane (his car owner and younger brother) has been working on and we qualified a little bit better,” McDowell said. “Then I didn’t get a good heat race start and Jimmy (Owens), he’s good here, and he beat us in the heat race so it put us starting seventh. I passed a couple of cars, but it was a little bit of attrition too (to reach third).”

Five caution flags dotted the race. Michael Chilton triggered the first on lap 14 when he slowed with flat tire. Ryan King brought caution conditions out again on lap 15 due to a fire under the hood of his Warrior Chassis house car while the event’s biggest incident came on lap 28 when Stacy Boles was left sitting between turns one and two after a tangle that sent Jimmy Owens and Cla Knight to the pit area with body damage. The final cautions flew on lap 44 when Ross Bailes relinquished fifth place and on lap 72 when Overton slowed while running third, both instances due to flat tires.

Notes: Madden’s victory was the fifth of his career in Schaeffer’s Spring Nationals action and his fourth under the Valvoline Iron-Man Series banner. … Bailes rallied after his mid-race pit stop to salvage a seventh-place finish in his Billy Hicks-owned car. … Jonathan Davenport, who won last year’s inaugural Lil’ Bill Corum Memorial, finished eighth after starting 22nd. He had to use a provisional to start the feature after he spun out of second place on the final lap of the fourth heat because a lapped car slowed in front of him entering turn one. ... Carson Ferguson, who entered the night leading the Spring Nationals points standings, used a provisional to start the feature and was the first retiree.